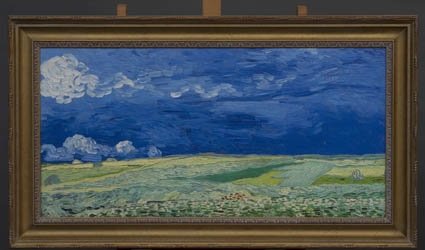 AMSTERDAM (Reuters) – It would be the envy of forgers: a technology that can mint near-perfect reproductions of Vincent Van Gogh’s paintings at a rate of three a day, with differences only experts can detect.

So far, five of the Dutch painter’s best-known works, including “Sunflowers” and “The Harvest”, have undergone the treatment in a project backed by Amsterdam’s Van Gogh Museum using technology developed by the Fujifilm unit of Fujifilm Holdings Corp.

“This is the next generation of reproductions. In the past we had lithographs, then photographs, first black and white, then color. Now these are reproductions in three dimensions,” Axel Rueger, director of the museum, said.

Each numbered copy on canvas with relief costs 25,000 euros ($33,300). The complex production process means only three can be produced a day, although prices may come down as production becomes cheaper and easier, Rueger said.

That’s more than the usual $15 university dorm poster of “Sunflowers” but a lot less than the $82.5 million Japanese businessman Ryoei Saito paid in 1990 for Van Gogh’s “Portrait of Dr Gachet” at a Christie’s auction, or the $53.9 million Australian businessman Alan Bond paid for “Irises” in 1987.

The market is unlikely to feel any impact from the cheaper but technically proficient copies, one art expert said. “I don’t see any harm done to rich Van Gogh collectors globally,” Jop Ubbens, head of Christie’s in Amsterdam, told Reuters.

“It is a brilliant innovation from a merchandising perspective by the museum reaching out to a total new target group, something completely different and very creative.”

Like many arts institutions hit by government budget cuts, the Van Gogh Museum is turning to the private sector and commercial ventures for funds.

It hopes to raise tens of millions of euros for its own renovation and research by selling the three-dimensional reproductions, known as “Relievos”.

The original work is copied using Fujifilm’s Reliefography technique, which combines a three-dimensional scan of the painting with a high-resolution print.

A copy of the painting is first made on canvas, producing a colorless relief. Ink is applied so the brush strokes match those in the original. The image is framed and the same process is used to apply copies of the torn and splotchy official stamps stuck to the back of the frame and canvas.

Van Gogh’s paintings appear highly textured as he used a technique known as “impasto”, where the paint is applied thickly to the canvas, showing the brush or knife strokes.

For each of the five paintings, the museum is producing a limited edition of 260 reproductions.

Luxury hotels and casinos are possible buyers, and some may be used for educational purposes, Rueger said.

“Van Gogh is very popular in Asia, and Hong Kong is a very commercial market,” Rueger said. “People in Asia have different attitude to reproductions. There was a lot of interest there.”