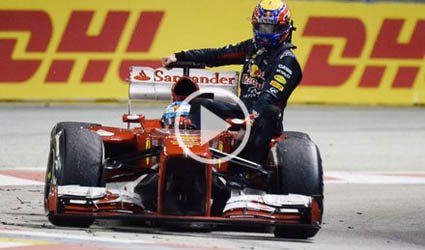 LONDON (Reuters) – Australian Mark Webber has branded as “comical” the reprimand he was given for hitching a ride on Fernando Alonso’s Ferrari after Sunday’s Singapore Grand Prix.

The reprimands for the Red Bull driver and Alonso have been a talking point since the weekend with Webber also collecting a 10 place penalty on the starting grid for next week’s Korean Grand Prix because of two previous offences.

Webber told his 765,000 followers on Twitter on Tuesday that for the pair “to receive reprimands for our actions after the race it is comical to say the least. Great moment, and fans loved it.

“And while I’m at it, contrary to reports, there was no interaction at all with any track officials after we put the fire out.”

The Australian had retired on the last lap at the Marina Bay street circuit after his car ran out of water and the engine caught fire.

He then ran back on the floodlit track to wave down Alonso’s Ferrari, which other cars had to weave to avoid, on the slowing down lap and ride to the pits on it.

Mercedes’s Lewis Hamilton, one of those who took avoiding action, said later he was shocked when he came round the corner.

“If Mark had been walking across where I went then I would have run him over,” said the 2008 world champion.

Britain’s Derek Warwick, a former grand prix racer who was one of the stewards in Singapore, said the reprimands were fully justified because of the potential danger posed.

“It is not health and safety gone mad,” he told the Daily Telegraph. “A driver could easily have been hurt. I hope we’re not seen as killjoys.

“I want Formula One to be entertaining. I want it to be a spectacle. I’m a big fan of MotoGP and I wish we in Formula One could get closer to the drivers like they do in MotoGP,” added the British Racing Drivers’ Club president.

“We have become a bit sterile in many ways in Formula One. But we cannot put drivers at risk. If it had been done in a safer manner then it might have been viewed differently. You can’t have cars parked in the middle of a corner.”

Webber also posted a picture on his Twitter account (@aussiegrit) of Warwick hitching a ride on the back of Austrian Gerhard Berger’s Ferrari at the 1988 Japanese Grand Prix as well as other photographs of similar incidents over the years.

“Looks like even one of the Singapore stewards has done it…#C’estlavie,” he commented.

Alonso also made light of the incident, posting on Twitter an altered poster for the 2004 movie ‘Taxi’ with his and Webber’s names at the top and their faces super-imposed on driver and passenger in a New York yellow cab.