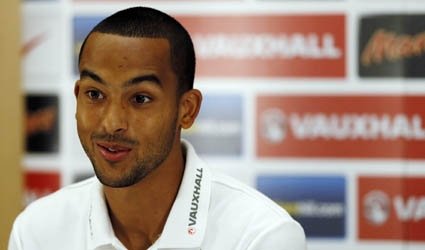 LONDON (Reuters) – Arsenal winger Theo Walcott has been ruled out of England’s last two World Cup qualifiers because he needs treatment for an abdominal injury, his Premier League club said on Tuesday.

“He will have the procedure in Germany on Wednesday and, because it’s so minor, we can begin his rehab immediately,” Arsenal manager Arsene Wenger told the club website (www.arsenalcom).

“We are pleased it’s being dealt with quickly and he shouldn’t miss too many Arsenal matches. But he will miss the forthcoming international matches with England.”

England, one point clear of Ukraine and Montenegro in Group H, are due to play Montenegro and Poland at home on Oct 11 and 15 respectively in their final qualifiers for next year’s tournament in Brazil.

Walcott missed Arsenal’s win at Stoke City on Sunday that sent the Gunners top of the Premier League after suffering slight damage to his posterior abdominal wall.

“It’s not a hernia, but it’s a little structural problem in his abdomen,” said Wenger.