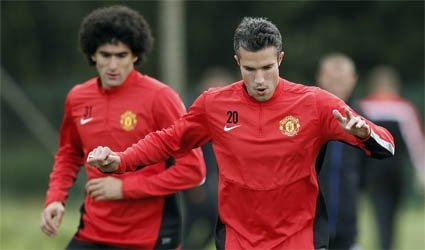 (Reuters) – Injured striker Robin van Persie is expected to miss Manchester United’s Capital One Cup tie against Liverpool on Wednesday but could be fit for Saturday’s Premier League clash with West Bromwich Albion.

“I don’t think Robin van Persie will play on Wednesday but he has an outside chance for Saturday,” manager David Moyes told reporters on Tuesday.

The Dutchman was sidelined for the 4-1 defeat at Manchester City on Sunday due to a groin strain and United missed the man whose 26 league goals last season helped them to the title.

Moyes said at the time he hoped to have him back for the third-round cup tie which is likely to see Uruguay striker Luis Suarez return for Liverpool after a 10-match ban for biting Chelsea’s Branislav Ivanovic last season.