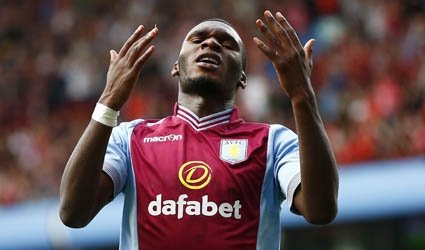 The Belgian, one of the joint top scorers in the Premier League this season with four goals, heads a list of Villa players carrying knocks as they prepare to host Spurs in the third round at Villa Park.

“We are waiting for the scan today and then waiting for the results so we will just have to wait and see (how long he will be out for),” manager Paul Lambert said on the club website.

Benteke was forced out of Saturday’s 1-0 win at Norwich City with a hip flexor problem and is just the latest name on a growing injury list.

“I’ve got to make changes for tomorrow, that’s for sure, because I’ve got a lot of injuries at the minute and Saturday’s (game against Manchester City) is massive for us as well,” Lambert said.