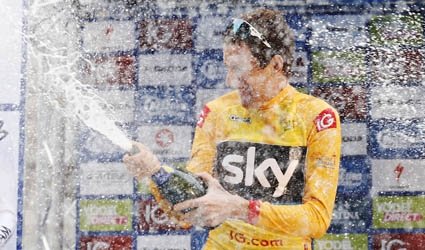 LONDON (Reuters) – Bradley Wiggins secured victory in the Tour of Britain on Sunday with huge crowds cheering him and fellow-Briton Mark Cavendish through central London.

The 2012 Tour de France winner began the eighth and final stage with a 28-second lead and comfortably protected his advantage during 10 laps alongside the River Thames.

Cavendish claimed his third stage win, sprinting away from Sam Bennett and Elia Viviani in a flat-out dash near the finish at Whitehall.

Martin Elmiger was second in the general classification.

“At the moment it’s just relief that the job’s done,” the 33-year-old Wiggins told the Team Sky website (www.teamsky.com).

“From the minute you’ve won the time trial you believe you can win the general classification, but it’s not over until you’ve crossed that line. (The lead) was only 26 seconds, so if you crash before three kms to go, and all those other little things to think about.

“It was a pretty hectic finish as everyone wants to win the last stage.”