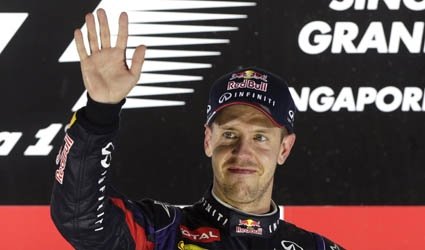 The German led from pole to flag and lapped on average almost two seconds quicker than his rivals to finish 32.6 seconds clear of Alonso and take another big step towards a fourth successive title with six races remaining.

Kimi Raikkonen shrugged off back pain to climb from 13th on the grid to third for Lotus in a challenging race that was held up by one decisive safety car period when Daniel Ricciardo crashed his Toro Rosso into the barriers on lap 26.

“Yes, yes, that’s what I call in control,” Vettel shouted over the team radio after chalking up his seventh win of the season and 33rd of his career in the heat of the Singapore night.

“The car felt absolutely fantastic. This is absolutely a team effort.”

Red Bull team principal Christian Horner said Vettel, who was again booed on the podium from some in the crowd below, had been in a league of his own after “one of his best ever drives”.

It was also one of his most dominant, even if the possibility of a safety car intervention was an ever-present concern.

“This is a long race so there are a lot of things that can go wrong so you can’t afford to lean back,” Vettel said in a podium interview.

“At the end, I was just controlling the gap. It was hard work out there but we like it because it is one of the most challenging tracks.”

Vettel was challenged briefly by fellow-German Nico Rosberg, who was second on the grid, on the run to the first turn but once he held off the Mercedes, he controlled the race.

“The start was quite hairy, Nico had a better start than me but thankfully he went a bit too deep and I was able to recover which was very important,” Vettel added.

“The car was incredible and it was a pleasure to drive it round this crazy track.”

Alonso again used a charging start and brilliant strategy to climb from seventh on the grid and keep his title hopes alive.

He gambled on pitting for a change of tyres during the safety car period and nursing his Ferrari all the way to the flag on medium tyres.

“We knew we didn’t have the pace today so we had to invent something with a different strategy from the other teams,” said the Spaniard. “It paid off at the end.

“We are in a position in the championship where we have nothing to lose.”

Raikkonen, who will join Alonso at Ferrari next season, duplicated the Spaniard’s strategy and was able to hold on for third place from the fast-charging Mercedes duo of Rosberg and Lewis Hamilton, who opted to stay out behind the safety car.

“Luckily not too much but now afterwards it is not feeling too good but it’s doesn’t matter as we have two weeks now to get it right,” the Finn said of the back ailment that almost caused him to abandon qualifying on Saturday.

“I think I had OK speed and I could overtake people so I just kept the pressure on and I managed to pull away and thankfully no one managed to catch me.”

Vettel’s team mate Mark Webber briefly climbed up to fourth place in the closing stages but his Red Bull lost power on the last lap and he slipped out of the top 10.

The Australian was given a lift back to the pits by Alonso after he abandoned his stricken Red Bull halfway around the circuit.

There was also disappointment for Romain Grosjean, who started third on the grid but retired on lap 33 after his Lotus suffered a pneumatic system failure and was called in by his team to retire in the pits.

The next race is in South Korea on October 6 before the series heads to Japan, India, Abu Dhabi, the United States and concludes in Brazil.