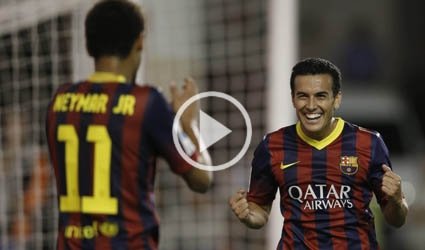 MADRID (Reuters) – Barcelona maintained their perfect start to La Liga with a 4-0 victory at Rayo Vallecano on Saturday, a Pedro hat-trick and a penalty save byVictor Valdes helping them to win a game that was not a simple as it looked.

Spain striker Pedro took his tally for the season to five goals, while Cesc Fabregas netted the fourth, after Rayo had made life difficult for the visitors becoming the first team to edge them for possession in a match in five years.

The champions have 15 points from five games, and moved top ahead of Atletico Madrid on goal difference, after Diego Simeone’s side also maintained their 100 percent record with a 2-0 win at Real Valladolid.

Barcelona coach Gerardo Martino rotated his squad again with Dani Alves, Andres Iniesta and Alexis Sanchez starting on the bench, and his side were quickly on the back foot against a hard-running and aggressive Rayo.

Valdes was called into action after only three minutes as he saved a point-blank header from Alberto Perea, the compact pitch at Vallecas and a turbo-charged start from Rayo unsettling Barca.

An Alex Song interception was the starting point for the opener in the 33rd minute, as he set Lionel Messi on a jinking run past two defenders, and the Argentineforward laid the ball off for Pedro to fire low into the corner

Rayo’s determination was undimmed, however, and minutes later Adriano bundled over Roberto Trashorras for a penalty.

Rayo matched Barcelona in the first half but were caught out again as another interception saw Fabregas break down the left and cross low for Pedro to finish high into the net in the 47th.

Rayo began to run out of steam and Neymar almost bagged his first league goal for the club when he shot against the post, and shortly afterwards he selflessly squared for Pedro to tap home the third in the 72nd.

La Liga’s leakiest defence then conceded a fourth seven minutes later after another interception on the edge of their area, and Fabregas calmly curled a shot inside the post.

“I liked the second half,” Martino said. “As we did against Ajax we improved as the game progressed. The team has the ability to score goals and keeping a clean sheet always gives us a chance.”