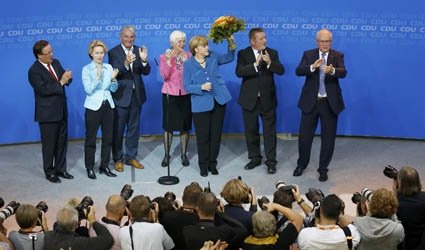 BERLIN (Reuters) – Chancellor Angela Merkel won a landslide personal victory in a German election on Sunday, putting her within reach of the first absolute majority in parliament in half a century, a ringing endorsement of her steady leadership in the euro crisis.

Partial results put her conservative bloc – the Christian Democratic Union (CDU) and Bavarian Christian Social Union (CSU) — on 42.5 percent, which if confirmed would be their strongest score since 1990, the year of German unification.

The outcome could give Merkel an edge of a few seats over the combined opposition in the Bundestag lower house for the first time since conservative Chancellor Konrad Adenauer achieved that feat in 1957. But she may still need a coalition partner for her third term when the final votes are counted.

“This is a super result,” Merkel told cheering supporters. “Together, we will do all we can to make the next four years successful ones for Germany.”

There was bitter disappointment for her Free Democratic (FDP) coalition partners, who looked set for a humiliating exit from the Bundestag, the first time they would be absent from the chamber in the post-war era.

A new eurosceptic party, the Alternative for Germany (AfD), could still rob Merkel of a parliamentary majority if it breaks through above the 5 percent threshold needed to enter parliament. The AfD was hovering on 4.9 percent in projections.

The radical Left party was set to be the third biggest force with about 8.4 percent, ahead of the ecologist Greens, who shed votes to finish with around 8 percent.

Despite the resounding victory, Merkel’s third term won’t be a cakewalk if she does end up ruling alone.

Some analysts worry that she could have trouble pushing legislation through both chambers of parliament. The Bundesrat upper house is dominated by left-leaning parties like the SPD and Greens.

“If Merkel does end up with an absolute majority, it will be a very narrow majority so it will not make things easier for her politically,” said Carsten Koschmieder, political analyst at Berlin’s Free University.

“She will have to pay much more attention to people in her own party, for example those who voted against Greek bailouts.”

Uncertainty over the final result means Merkel may yet end up being forced into another ‘grand coalition’ with the SPD, with whom she ruled between 2005 and 2009.

In that event, negotiations could last months and Merkel might be compelled to accept more leftist policies that the SPD has advocated in the campaign, such as a minimum wage and higher taxes for top earners.

“We won’t be committing to any coalition this evening,” SPD second-in-command Andrea Nahles said, reflecting deep resistance within the party to partnering with Merkel for the second time in a decade. The SPD came off worst after their first coalition.

Many of Germany’s European partners hold out hope that the Social Democrats could push Merkel to soften her stance towards struggling southern euro states like Greece, although the chances of major shifts in policy are slim.

French President Francois Hollande, a Socialist who had hoped for a strong SPD showing, was swift to congratulate Merkel on her victory in a telephone call and invite her to Paris once a new government is formed, the French presidency said.

European Council President Herman Van Rompuy, who chairs EU summits, said in a message of congratulation to Merkel: “I am confident that Germany and its new government will continue its commitment and contribution to the construction of a peaceful and prosperous Europe at the service of all its citizens.”

One of Merkel’s key CDU ministers pledged that Berlin would do its share to help pull the euro zone out of crisis.

“We will remain reliable in the role of stability anchor and growth locomotive. We will keep Europe together,” said Finance Minister Wolfgang Schaeuble, who has played an influential role in Germany’s management of the euro zone debt crisis.

Merkel, the daughter of a Protestant pastor who grew up behind the Iron curtain in East Germany, is on track to become the third post-war chancellor to win three elections, after Adenauer and her mentor Helmut Kohl.