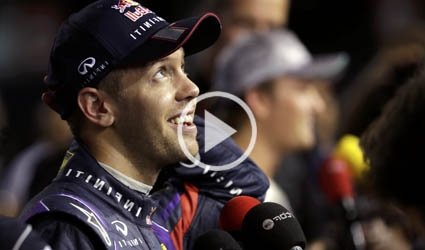 SINGAPORE (Reuters) – Sebastian Vettel continued his imperious march towards a fourth consecutive Formula One world championship by storming to pole position at the Singapore Grand Prix on Saturday after dominating the two days of practice.

The Red Bull driver, who is 53 points ahead of Ferrari’s Fernando Alonso with seven races remaining, clocked a fastest lap of one minute 42:841 seconds around the floodlit Marina Bay Street Circuit.

The German will be joined on the front row by compatriot Nico Rosberg for Mercedes, who was just 0.091 seconds behind.

The second row for Formula One’s only night race will be occupied by Lotus’sRomain Grosjean and Vettel’s Australian team mate Mark Webber.

“Pole is the best position to start from as it is tricky to pass on this track but it’s such a long race, so there are plenty of opportunities for all of us… we usually get a safety car in this race, too,” Vettel told reporters.

Lewis Hamilton will start in fifth place in the second Mercedes while Alonso languished in seventh, outqualified by Brazilian team mate Felipe Massa.

Vettel has looked unstoppable since the second practice session on Friday and although he set the quickest time ever around the demanding 23-turn circuit early in the final qualifying round, he had a nervous wait to be sure of pole after gambling that the time would suffice.

“It’s a weird feeling to stand in garage with two minutes to go, it’s much worse when you watch the others and there’s nothing you can do,” the champion told reporters after Rosberg just missed out.

“I was watching the sectors times closely. Mark started with a purple (fastest) sector and Nico and Romain then had a purple sector, but fortunately my last sector was strong enough.

“It was a great feeling, I’m very happy with the result. The car has been phenomenal all weekend.”

The pole position was the 41st of Vettel’s career and fifth of the season and with Alonso so far back on a circuit that is notoriously difficult for overtaking, only a tropical downpour or a series of safety car periods looks like preventing the German from extending his lead on Sunday.

Rosberg was disappointed not to have overhauled the triple world champion on his final flying lap but still delighted with his overall performance.

“It was very close and it was a pity because one tenth more it would have been possible, but second is still a good result and gives us a good position to start the race tomorrow,” the German said.

“We are confident about our race pace so I think a great result is possible.”

Like Red Bull and Mercedes, Lotus have a car that suits the rigours of high downforce tracks like Singapore and despite team mate Kimi Raikkonen nursing a bad back and managing only 13th on the grid, Grosjean drove brilliantly to qualify third.

“The car has been okay today and if we look at the number of laps we have done this weekend, it is not too bad,” the Frenchman said. “The team made a good decision for the strategy and it is good to be in the front for this grand prix.”

The top 10 was completed by McLaren’s Jenson Button, Toro Rosso’s Daniel Ricciardo and Sauber’s Mexican rookie Esteban Gutierrez, who reached the third round of qualifying for the first time in his career.