the art of publishing
More
Home Sport United’s Rooney Back At His Best, Says Ferguson 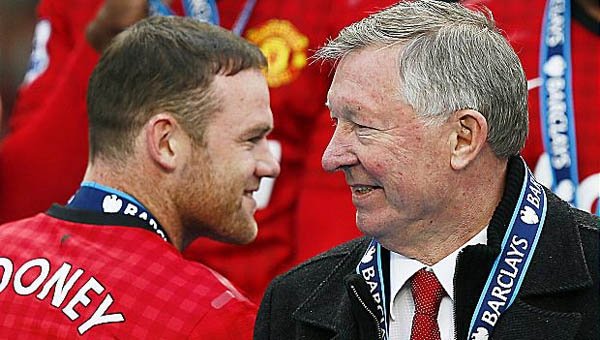 Former Manchester United manager Alex Ferguson has lavished praise on Wayne Rooney’s form in comments that are being interpreted in the British media as the extension of an olive branch to the unsettled player.

Ferguson was critical of the England striker’s form last season and the Scot’s disclosure in May that Rooney wanted to leave Old Trafford was reported to have fuelled the 27-year-old’s desire to seek a new challenge elsewhere.

Although Ferguson handed over the managerial reins to David Moyes in the off-season, he remains a director at the club and is widely perceived to retain considerable influence behind the scenes.

Three bids for Rooney from Premier League rivals Chelsea were rejected in August, though, and his display in the 4-2 Champions League win over Bayer Leverkusen on Tuesday, when he scored two goals, had Ferguson purring.

“Wayne’s performance was fantastic, I was pleased to see that,” the 71-year-old told the club’s in-house TV station.


“He’s got his energy back – the determination, his purpose to attack players, was all very encouraging to me.

“Being a director, I’m delighted to see that. He’s back to what we always remember him as.”

The goals against Leverkusen brought Rooney’s tally at the club to 200 in 406 appearances, leaving him fourth on United’s all-time leading scorers’ list behind Bobby Charlton (249), Denis Law (237) and Jack Rowley (211).

Restored to his preferred striker’s role after being sometimes deployed by Ferguson in midfield last year, Rooney adds another attacking threat to that of Robin van Persie, who was top scorer in the Premier League last season with 26 goals.

“We will have a fantastic chance because in Van Persie and Rooney, you have forwards who can win you games,” said Ferguson, who led United to their 20th English title last season.

Rooney, who has two years left on his current contract, was non-committal about his future at United after the Leverkusen match, telling reporters he was concentrating on his football.

He did, however, say he was comfortable playing for Moyes, who gave him his debut as a 16-year-old at Everton in 2002 before selling him to United for 25.6 million pounds two years later.

“The training is a bit different under the new manager,” Rooney told British media. “I remember it from Everton, it’s more intense. But that’s helping me. I feel good and am glad to be out playing.

“He a great manager and thoroughly deserves this job, because of what he did at Everton.”