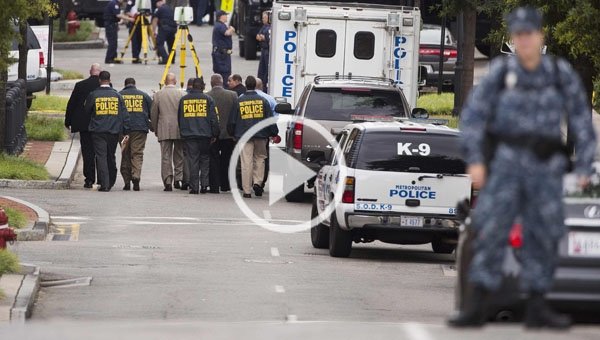 WASHINGTON (Reuters) – A U.S. military veteran opened fire at the Washington Navy Yard on Monday in a burst of violence that killed 13 people, including the gunman, and set off waves of panic at the military installation just miles from the White House and U.S. Capitol.

The FBI identified the suspect as Aaron Alexis, 34, of Fort Worth, Texas, a Navy contractor who had two gun-related brushes with the law. He was discharged from the NavyReserve in 2011 after a series of misconduct issues, a Navyofficial said.

He was killed in one of several gun battles with police after he entered the Naval Sea Systems Command headquartersabout 8:20 a.m. (1220 GMT) and started picking off victims in a cafeteria from a fourth-floor atrium, witnesses said.

That set off pandemonium, with fire alarms sounding and security officers yelling at people to leave the building. Hundreds fled, some scrambling over walls to escape the gunfire. A loudspeaker announcement ordered those who remained to stay in their offices.

The motive remained unknown. He was armed with an AR-15 military-style assault rifle, a double-barrelled shotgun and a handgun, a federal law enforcement source said.


Eight people were injured including three who were shot, Washington Mayor Vincent Gray said. Those killed were aged 46 to 73, he said. Investigations continued into the circumstances of their deaths.

Investigators earlier were pursuing a possible second gunman but later said there were no suspects beyond Alexis. The incident has raised questions about security at the Washington Navy Yard, about a mile (1.6 km) south of the U.S. Capitol and 3 miles (5 km) from the White House.

Alexis, a contract employee, had legitimate access to the Navy Yard and used a valid pass, the FBI said. Authorities did not address how he could have sneaked weapons onto the base.

“Everybody was panicking and trying to decide which way to get out. A few of us just ran out the side exit,” Patricia Ward, who works at theNavy Yard, told reporters.

It was the worst attack at a U.S. military installation since U.S. Army Major Nidal Hasan opened fire on unarmed soldiers at Fort Hood, Texas, in 2009, killing 13 people and wounding 31 others. Hasan, who said he acted in retaliation for U.S. wars in Muslim countries, was convicted and sentenced to death by a military jury in August.

“We are confronting yet another mass shooting, and today it happened at another military installation, in our nation’s capital,” said U.S. PresidentBarack Obama, who vowed to enact “sensible” gun control measures after a gunman shot dead 20 school children and six adults at an elementary school in Connecticut in December.

Alexis, a one-time Texas resident who was known to worship at a Buddhist temple, served in the military and most recently was furthering his education while holding a job in the private sector, his father, Algernon Alexis, told Reuters in a telephone interview.

“This comes as a complete shock,” the elder Alexis said when told his son was the suspected shooter.

Alexis served full time in the U.S. Navy Reserve from May 2007 to January 2011, becoming an aviation electrician, and he received the National Defence Service Medal and the Global War on Terrorism Service Medal, a Navy official told Reuters.

He was recently hired as a civilian information technology contractor to work on the Navy and Marine Corps intranet and was given a security clearance classified as “secret,” his company’s chief executive told Reuters.

“He did have a secret clearance. And he did have a CAC (common access card),” said Thomas Hoshko, CEO of the company, called The Experts.

Alexis was arrested on September 4, 2010, in Fort Worth, Texas, on a misdemeanour charge of discharging a firearm but the case was dropped when investigators determined he was cleaning his gun and it accidentally fired, Tarrant County prosecutors said.

He was also arrested in Seattle in 2004 for shooting out a construction worker’s car tires in an anger-fuelled “blackout” triggered by perceived “disrespect,” according to the Seattle Police Department.

In recent years, he developed a love for Thai culture, learning to speak the language and working at the Happy Bowl restaurant in Fort Worth,Texas, in 2008, said Tiki Confer, 64, owner of another Thai restaurant nearby. He worshipped at a Buddhist temple, she said.

“He was a very nice boy. When I saw his picture on the news, I was shocked,” Confer told Reuters.

The shooting rattled the U.S. capital, forcing the Federal Aviation Administration to briefly suspend departures at Reagan National Airport. The District of Columbia Public Schools put six schools and an administration building on lockdown as a precaution.

The Washington Nationals baseball team postponed their game against the Atlanta Braves scheduled for Monday night at nearby Nationals Park.

Washington police chief Cathy Lanier said investigators lifted the “shelter in place” for neighbourhoods near the Navy Yard once they had exhausted all leads for a possible second shooter.

Military personnel are generally banned from carrying weapons on military installations but most people with proper credentials are not routinely checked for firearms.