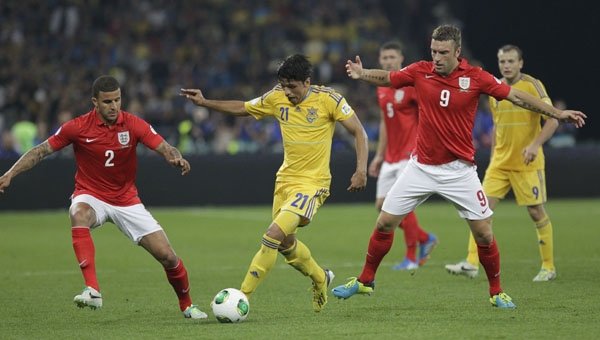 KIEV, Ukraine (AP) — England ground out a 0-0 draw against Ukraine on Tuesday to take a one-point lead in its 2014 World Cup qualifying group. Both sides showed tenacity and quick tempo play in a match watched by a crowd of 70,000 where the chances came from set pieces in a balanced first half, while Ukraine increased the pressure in the second.

But England will return home from Kiev’s Olympic Stadium with a sense of satisfaction after taking 16 points from eight games in Group H. Second-place Ukraine and Montenegro have 15 ahead of the last two rounds of matches — which England will play at home against Montenegro and Poland respectively. Ukraine carved out a chance in the 53rd minute with a dangerous cross from Andriy Yarmolenko, while Yevhen Konoplyanka flashed a free kick wide in the 71st. Three minutes later, Artem Fedetsky headed a cross straight at England goalkeeper Joe Hart. England’s best chance came in the 82nd when Theo Walcott failed to make the most of a pass from Kyle Walker. England coach Roy Hogdson predictably started with Rickie Lambert up front, while Ukraine coach Mykhailo Fomenko reshuffled his lineup by starting Oleksandr Kucher in place of mainstay defender Yaroslav Rakitsky, and putting Roman Zozulya in the sole attacking position. “We played with a team that belongs in Europe. It’s a strong team, they tried, we defended, we tried, they defended,” Fomenko said. “England is a strong team who has many players playing in the Champions League, it was a tough fixture.” Englandnext hosts Montenegro on Oct. 11, while Ukraine will play Poland the same day.