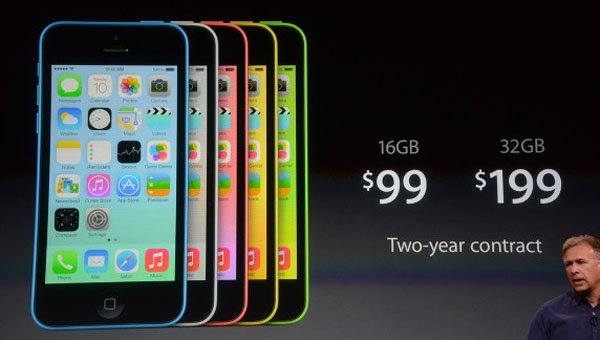 CUPERTINO, Calif. (AP) — Two new iPhones in an array of colors and a redesigned operating system to run them were among the major announcements from Apple on Tuesday.

It’s the first time Apple is releasing two iPhone models at once. In the past, Apple simply offered one new model targeting the high-end market. This time, there’s a slightly cheaperiPhone as well. The change comes as Apple faces growing competition from Samsung, HTC and other makers of phones that run Google’s Android operating system.

Here are the highlights of Tuesday’s event at Apple’s Cupertino, Calif., headquarters.

Apple is discontinuing the iPhone 5 released last fall. It’s being replaced with the cheaper iPhone 5C and the high-end iPhone 5S.


The iPhone 5C has many of the attributes found in the iPhone 5. It has a screen measuring 4 inches (10.16 centimeters) diagonally and sports an 8 megapixel camera. The new phone, however, is largely made of plastic and doesn’t have the aluminum side and glass back found in the iPhone 5. The 5C also is more colorful. It comes in a choice of green, blue, yellow, pink or white, rather than the traditional black or white.

The iPhone 5S has an identical screen, and its camera is also 8 megapixels. But each pixel is larger. That means it’s better at capturing light, which should translate into better photos indoors and other low-light settings. The new camera also has a dual flash, which Apple calls True Tone. The flash fires two bursts of lights at once, each slightly different in color. TheiPhone will adjust the combination of the two automatically to bring out more natural skin tones and other colors in images.


The 5S also has a faster, 64-bit processor, which lets it handle more data simultaneously compared with traditional 32-bit systems.

Also available with the 5S: a fingerprint-recognition system that lets you easily unlock phones without having to type in a four-digit code. Apple says many people don’t use a passcode because it is cumbersome. With fingerprints, Apple says, the iPhone can offer security more easily.

Advance orders for the 5C only start Friday. Both versions will be available a week later, on Sept. 20, in the U.S., Australia, Canada, China, France, Germany, Hong Kong, Japan, Puerto Rico, Singapore and U.K. This is the first time a new iPhone has been available right away in China, one of the world’s fastest-growing markets.

Although Apple is discontinuing the iPhone 5, it will still offer the model before that, the iPhone4S. The 4S will now be free with a two-year agreement.

The new phones will come with iOS 7, the next version of Apple’s operating system foriPhones, iPads and iPod Touches.

The biggest change comes in the new system’s design: Instead of app icons that try to mimic real-world counterparts, Apple is favoring simplicity and consistency from app to app. The new 5C phones were designed to complement the color scheme found in the new operating system.

As previously announced, you’ll be able to swipe up from the bottom of the screen to access a control center, for such functions as turning on airplane mode and adjusting brightness. It’s similar to a feature available on rival devices running Android.

The calendar has been cleaned up and looks more streamlined. You can also get to your contacts list quickly while reading messages by swiping from the left of the screen. A featured called AirDrop will let people share content with other Apple devices.

There’s also better organization of photos you take on iPhones. Instead of the endless streams of the past, pictures will be organized into moments — such as “home” or “trip to San Francisco.”

The Siri virtual assistant is getting refreshed, too. You’ll be able to choose a male voice, not just a female one as is currently the case.

In addition, the iOS 7 system includes Apple’s new streaming music service, iTunes Radio. The service will personalize listeners’ music based on what they’ve listened to and what they’ve purchased on iTunes. If you like a song, you can buy it through iTunes with one click.

Owners of older iPhones can get the iOS update for free starting next Wednesday. Just respond to the prompt when it comes or go to “Software Update” in the settings under “General.” Apple said iOS 7 will be available to download and install on the iPhone 4 and later, the iPad 2 and later, the iPad Mini and the fifth-generation iPod Touch, the one released last year.

Apple will make its iWork package of apps — Pages for word processing, Numbers for spreadsheets and Keynote for presentations — available on iPhones and iPads for free. The apps were $10 each. Apple is also making the iPhoto and iMovie apps available. Those were $5 each. The company says the creativity software complements the iWork package for productivity.

The offer is available to buyers of new iPhones, iPads and iPod Touches, retroactive to Sept. 1. The device must be compatible with iOS 7 to qualify. Once a new device is purchased, the app can be downloaded for free to other devices on the same account, as long as the device is upgraded to iOS 7.

Apple did not announce an update to a Web-based version of iWork. It’s currently available in a beta test mode. Apple announced the Web-based version during a presentation in June, saying that iWork for iCloud will be available this fall. Apple hasn’t provided details on pricing.