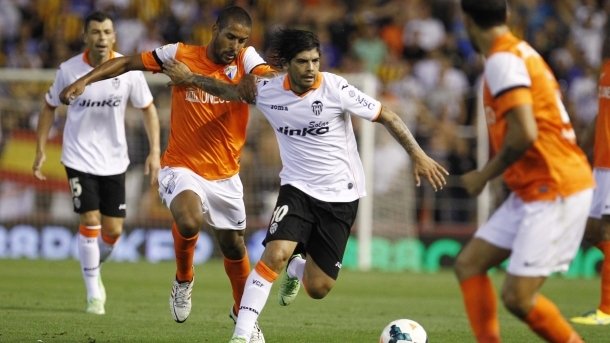 Ricardo Costa scored for the locals in minute 65, who took advantage of Willy moving away from the area, as the result of a possible foul. Bernd Schuster’s men were determined to equalise, but were unable to get a goal before the final whistle. Angeleri, Chen, Tissone, Sergi Darder, Bobley Anderson and Samuel made their official debut with the Blue and Whites in this match.

The new Málaga Club de Fútbol of 2013/14 kicked off this season’s campaign at the Mestalla stadium, with four new players making their official debut with the team: Angeleri, Chen, Sergi Darder and Tissone, along with Bobley Anderson and Samuel in the second half. The first two players formed the basis of the ‘Malaguista’ defence, whilst Sergi Darder and Tissone were in midfield.

The other two new signings joined the match in the second half.  Bernd Schuster’s style of play was evident from the offset at the Mestalla this evening.  Málaga CF players were well positioned on the pitch, showed creativity and were pacey on the attack.  The Blue and Whites put on a very intense performance throughout the game.   The ‘Malaguistas’ had the chance to open the scoring in the first 45 minutes.

Angeleri missed the target by a whisker following a free kick by Pedro Morales, which should have seen the visitors take the lead.   A header by Rami in the 19th minute that went over the crossbar, was the first chance for Djukic’s men.  The dynamic of the match changed in the second half, particularly at the start.  Ricardo Costa opened the scoring for Valencia, following a possible foul by Rami that obstructed Willy.

Schuster introduced Bobley Anderson and Samuel to the match, and the Blue and Whites had a final push for an equaliser in the final minutes, but were unable to score before the whistle.

Information: First BBVA League match of the season, held at the Mestalla Stadium.  Angeleri, Chen, Sergi Darder, Tissone, Bobley Anderson and Samuel made their official debut with the Blue and Whites.  Pawlowski was unable to take part in this game as his transfer clearance didn’t arrive in time.