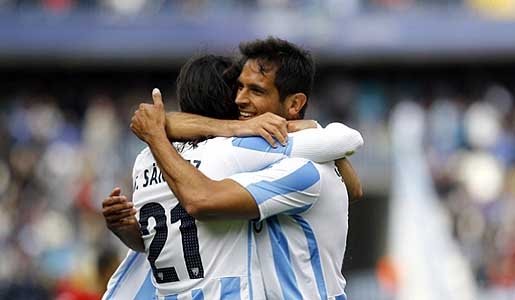 Málaga CF achieved a well-deserved win against Getafe CF, to keep their European hopes alive for next season, both in the Champions and Europa League. Goals from Santa Cruz and Weligton were worth their weight in gold.
Manuel Pellegrini made a few changes to the usual formation in the match against the Madrid-based side, putting Demichelis in midfield, Sergio Sánchez on the left wing and Pedro Morales on the right.
Although the Blue and Whites created more goal chances in the first few minutes of play, it was Pedro León for Getafe who had the first shot at Willy Caballero’s goal, nine minutes into the game.

Impressive play from Isco on the right wing led to a chance for Iturra in minute 11, which was saved by the Getafe keeper without too much trouble.  Minutes later Pedro Morales had a chance at glory in front of the penalty area following a counter-attack, but failed to open the scoring.

Getafe were quick to get back on the attack, and a Barrada shot at goal following a Diego Castro pass from the left wing was saved by Willy.  The Blue and Whites were trying to impose their own rhythm of play, and Baptista came close to netting a goal from just outside the six-yard box, but failed to cause any real danger for Codina.

In minute 27 the referee declared a Málaga goal offside, as Santa Cruz made a clear pass to Isco who was unmarked in front of the goal area.

Half an hour into play and a Jesús Gámez injury led to another change in the Málaga CF formation.  Camacho joined the game, putting Demichelis centre-forward and Sergio Sánchez taking over from Jesús Gámez on the wing.  It appeared that Pellegrini’s men were waiting for the sun to come out before going for glory.

Following the disallowed Málaga goal, Getafe became more insistent and stepped up their attack.  Luis García’s men gained control of the ball, but failed to create any real goal opportunities.

However, the visitors weren’t in control for long.  Brilliant play from Sergio Sánchez on the right wing allowed Roque Santa Cruz the perfect header into goal in the 39th minute.  The Paraguayan-born striker smashed the ball straight past Codina to open the scoring and put the Blue and Whites in the lead.

Santa Cruz came close to a second goal during extra time at the end of the first half, but the ball hit the post.

The second half got underway in much the same way as the first 45 minutes ended, with a chance for the ‘Malaguistas’.  In minute 46, a Morales free-kick saw an opportunity for Baptista, but a corner-kick was given.  This was the ideal prelude to the next action, as Weligton put the Blue and Whites further into the lead by 2-0, again with a header into goal, to keep dreams of European football next season very much alive.

Santa Cruz had another promising opportunity to increase the Blue and Whites’ lead even more in minute 58.  A counter-attack driven by Baptista resulted in a shot by the Paraguayan-born striker, forcing Codina to come out to the front of his goal area in order to prevent the local side’s third goal of the match.

Málaga CF was the dominant side this afternoon, maintaining possession, showing impressive movement on the wing and good combinative play amongst the strikers.  The fans in the stadium were going wild in support of their team today.

Getafe scored in the 70th minute following a free-kick by Juan Rodriguez, allowing Valera the chance to net the first and only goal for the Madrid-based side.

The ‘Malaguistas’ weren’t about to take any risks, and continued on the attack in search of a third goal.  In minute 73 a free-kick by Duda allowed Demichelis to set up the perfect shot for Julio Baptista, but he couldn’t get there in time before the Getafe defence took over.

Luis García’s men were determined to equalise, and despite the ‘Malaguista’ nerves, they didn’t create any real danger around the goal area in the final part of the match.  The Blue and Whites had another chance to seal their victory, and skilful play between Duda, Joaquín and Baptista in the penalty area looked certain to end in a goal, but Baptista just missed his chance.  Seconds later Baptista set up a shot for Joaquín, but he sent the ball way over the crossbar.

Málaga CF earned a well-deserved three points, keeping them very much in the running for Europe next year.

INFORMATION: 33rd BBVA League match of the season, held at La Rosaleda in front of a 24,246 strong crowd.