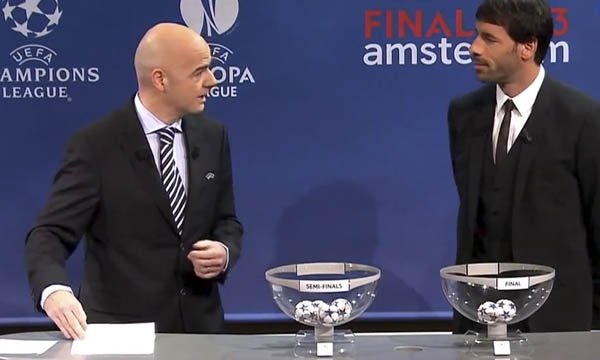 Both first legs will take place in Germany on 23 and 24 April, with the returns in Spain on 30 April and 1 May after the open draw at UEFA headquarters in Nyon, conducted by UEFA General Secretary Gianni Infantino and former Netherlands striker Ruud van Nistelrooy.

The Bayern v Barcelona tie is a mouth-watering prospect: newly crowned German title holders take on Spanish champions-elect. They have met surprisingly little on the European stage, though their six encounters encompass the 1995/96 UEFA Cup semi-finals – which Bayern edged – and most recently the last eight of the 2008/09 UEFA Champions League. There a first-half double from Lionel Messi in the first leg meant there was only ever going to be one winner.

Both teams have had their scares this season. Arsenal FC pushed Bayern all the way in a stirring round of 16 comeback while Barcelona were 19 minutes from elimination on Wednesday before Pedro Rodríguez struck against Paris Saint-Germain FC to seal progress to a record sixth straight semi on away goals. Dortmund left it somewhat later against Málaga CF, needing two added-time goals to complete their Lazarus act in a turnaround up there with the best in the UEFA Champions League’s 21-year history.

Their reward is a tie with Madrid, who were also their opponents 15 years ago in the last of their three European Cup semi-finals to date. The Merengues proved too powerful, a 2-0 home victory preceding a 0-0 second-leg draw. The Schwarzgelben can take heart from the fact that in the group stage they claimed a 2-2 draw and 2-1 win against Madrid – yet the Merengues present a real hurdle.

They may trail Barcelona by 13 points in the Liga with eight games to go but they have measured up with everyone in this competition. Earlier this week José Mourinho spoke of his side having a 25% chance of claiming a tenth European Cup next month, and for many those odds have shortened. It will be a record-equalling seventh semi-final for the Portuguese coach: he has won two out of six so far, though tellingly he has triumphed both times he has made the final.

The draw means there may be a final between two clubs from the same country for the fourth time in UEFA Champions League history – and the first since 2008. Madrid were victorious in the first of those, defeating Valencia CF in the 2000 Paris showpiece. AC Milan sneaked past Juventus on penalties three years later and Manchester United FC also needed spot kicks to beat Chelsea FC in 2008.