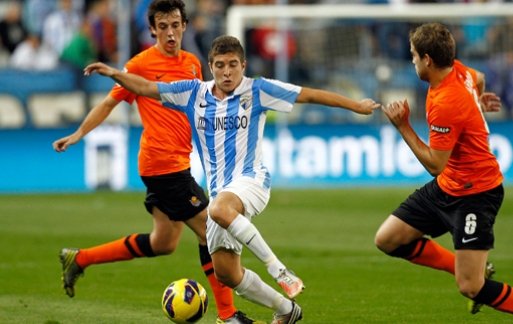 Málaga Club de Fútbol was defeated 4-2 by Real Sociedad in the 30th BBVA League match of the season this afternoon. The first three Real goals came within the first 30 minutes of play, by Vela, De la Bella and Griezmann. Pedro Morales scored Málaga’s first goal of the match just before half-time, however Iñigo scored Real’s fourth goal five minutes into the second half. Málaga CF managed a second goal with an impressive Santa Cruz header; the match ending with a 4-2 victory for the locals. Although the Blue and Whites (wearing the black away kit for this match) did step up the attack, no further goals were deserved for the remainder of the game.
Málaga Club de Fútbol presented a very different team compared to the last match.  Manuel Pellegrini’s men dominated possession within the first few minutes, although they didn’t manage to reach Bravo’s goal area.  However Real had a dream 10 minutes to gain a big advantage on the score board.  A shot at goal by Griezmann hit the crossbar, leading to a corner for Real.
Kameni stopped the ball at close range at the far post, but could do little to prevent the rebound, with the ball landing at Vela’s feet, who netted the home side’s first goal.
A strong left-footer from De la Bella outside the penalty area resulted in Real’s second goal three minutes later, and they weren’t about to stop there.  A deep pass from Agirretxte set up the perfect ball for Griezmann, who secured Real’s 3-0 advantage.  Málaga CF refused to give up, leading to a fantastic goal by Pedro Morales from outside the penalty area, just before the half-time whistle, putting the score at 3-1 after 45 minutes. Real were quick to score again early in the second half.
This time it was an Iñigo header into goal, following a corner.  Despite the score, Málaga were desperate to get another goal.  Duda and Lucas Piazon came on to the pitch in substitution of Portillo and Pedro Morales, the latter having to abandon play through injury, as did Mexican-born Vela.  A Weligton header following a corner kick, and a chance for Seba could have reduced the local side’s goal advantage, but they failed to get the glory.  However it was Santa Cruz who scored Málaga’s second goal of the match, with an impressive header following a pass from Antunes.  Baptista replaced Camacho in the final part of the match, but the final result remained a 4-2 win for Real.

Despite this defeat, Málaga Club de Fútbol has 47 points and still in fifth place in the BBVA League.  The ‘Malaguistas’ face Borussia Dortmund on Tuesday in the UEFA Champions League quarter-final second leg, and host Club Atlético Osasuna at La Rosaleda next Saturday, in the 31st League match of the season.