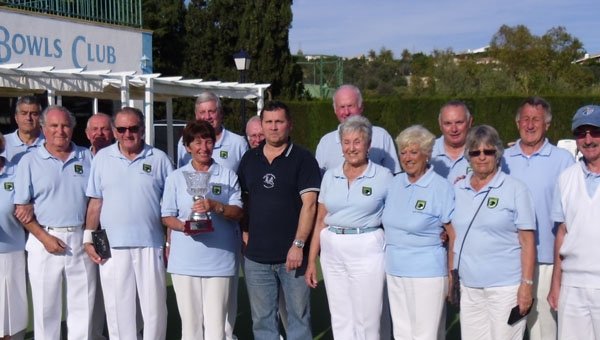 THE semi-finals and final of the Costa del Sol Lawn Bowls League President’s cup were held at Lauro Golf.

Teams from La Posada and Santa Maria, were paired against their more experienced counterparts. Nerves certainly got the better of Allen’s Four who were 14-0 down to the Mijas quartet after 4 ends. They did settle but were always up against it and finally lost 30-6.

In comparison Chris Hussey’s Team got off to a great start against the favourites and led 5-1. Unfortunately for them, once the dust settled, the vastly experienced Joe and John started to dictate the game and they ran out winners by 26-7.

In the final there was a 22-11 victory for Joe, John, Jim and Juan, new names on the trophy with Juan being the first Spaniard to win the event.

On a hot and sunny afternoon, a large crowd gathered at Santa Maria to watch the League Cup Final.

Benalmadena was seeking to win the event for a third successive season, and to achieve the coveted League & League Cup double.

The Match did not disappoint as five of the six rinks were very closely contested with three of them going to Benalmadena with a shot difference of +4.

What killed it for Mijas was the superb performance by the President’s Fours Winners. Joe, John & Jim were in awesome form and, from being 16-0 up at five ends, went on to rack up a 36-6 victory to give the Holders an overall 116-82 win.

Commemorative Prizes were presented to both Teams by David Parnell of the Sports Shop.

BREAKING: Rockets Fired at US Embassy in Bagdad