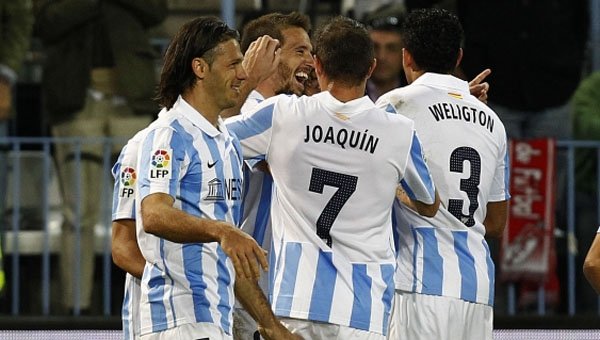 Málaga CF came out on top in the derby against Granada CF with a 4-0 win. The visitors were unable to convert any of their chances into goals during the first half, and fell victim to Manuel Pellegrini’s powerhouse, with goals from Joaquín, Saviola, Camacho and Santa Cruz. Now with 25 points, the Blue and Whites keep the Champions League dream alive and are one of the teams who have conceded the least number of goals in the BBVA League this season.

The match got underway with a very determined Granada looking for victory.  They created numerous chances to score in the first ten minutes of play, including a promising header by Mainz that resulted in a corner.  Another opportunity arose for Anquela’s men 15 minutes in; a pass from Dani Benítez set up a chance for Ighalo in front of the penalty area, but he sent the ball way over the crossbar.

Málaga took a bit of time to gain the rhythm of the match, against a Granada who knew of their need to regain Champions qualification positions in the League.  Bit by bit the locals began to take the reigns of the game, and a shot from Eliseu in the 23rd minute just went shy of the goal.

The Blue and Whites soon licked the game into shape by opening the scoring.  Joaquín took advantage of a stumble by Diakhaté to find himself in front of Toño’s goal, creating an impossible save for the Granada keeper, and putting Málaga 1-0 in the lead.

Manuel Pellegrini’s men began to control the match after the first goal in the Andaluz derby.  Another chance came for Jesús Gámez only minutes later, following a good combination between Isco, Portillo, Saviola and Eliseu, but the ball hit the crossbar.

After half an hour, Málaga proved their dominance in the match with a second goal.  Saviola put the Blue and Whites in the lead by 2-0 by scoring his fifth League goal and sixth of the season, with the locals practically sealing their victory after just 30 minutes.

Although the Rosaleda outfit was giving an outstanding performance on the pitch, Granada didn’t stop in their search for a goal.  A chance for Ighalo following a corner was deflected off Willy, but which led to a promising shot for Iriney that failed to make the back of the net.  It was then Torje’s turn to try and get past the mighty Willy Caballero, but he failed to get a goal.  By rights, Juan Antonio Anquela’s men should have scored, but they were still 2-0 down at half time.

Málaga CF came out in the second half to rapturous applause from fans, following the excellent display of combinative play and possession which adds up to their best football style and one which has led to numerous victories.

The visitors went on the attack in the second half and began to reach Willy’s goal area, but in a perhaps somewhat more apprehensive manner than earlier on in the game.  El Arabi was close to glory in minute 67, with a goal that narrowly missed Willy, however the Málaga keeper again prevented any real danger.  Anquela’s men had their best opportunities to score in the second half, as they maintained possession well, however they were unable to make any difference on the score board.

Málaga’s attack became a lot more powerful as Granada’s determination increased.  A chance for Joaquín came in the 70th minute, but was stopped by Toño.  It was then Portillo’s turn to create a 3-0 lead for the Blue and Whites, with Weligton and Santa Cruz waiting in the wings, but the ball was deflected off the keeper.

Following a Joaquín free kick Camacho slammed the ball into the back of the net to secure Málaga’s 3-0 lead, against a Granada side who up to now hadn’t taken advantage of any of their goal chances throughout the match, particularly in the first half.

Wallowing in their almost guaranteed defeat, Granada let their guard down, leading to chances for Santa Cruz, Weligton and Buonanotte, who substituted Isco in the 73rd minute.
With just five minutes left before the final whistle, Roque Santa Cruz scored one of the best goals of the match.  Eliseu passed the ball to an unmarked Buonanotte on the right wing, and after maintaining control of the ball in front of the penalty area, set up a great chance for Santa Cruz, who cruised the ball into the net underneath Toño.