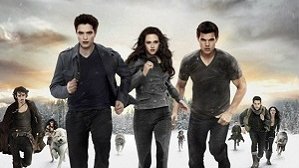 This was part of a hectic promotional trail around the world for Twilight Saga: Breaking Dawn Part 2 which can now be seen at cinema’s across Spain, some in the original English with Spanish subtitles (check the cinema near you).

They spent time chatting with the host – through a translator – and taking part in the games typical of the show. This included Rob being blindfolded and using a buzzer.

When asked about the film, Kirsten said: “I could have done this forever. Because it is finished it makes so much sense to walk away. It is not the most difficult thing.”