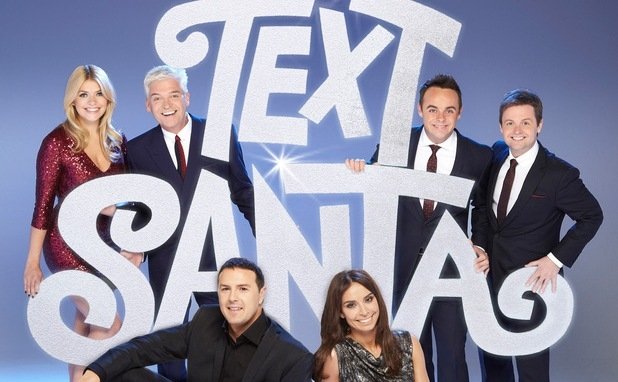 Paddy McGuinness has been added to the lineup of star presenters for this year’s ITV1 Text Santa fundraiser.

The Take Me Out host will be joined by Ant & Dec, Phillip Schofield, Holly Willoughby and Christine Bleakley for the live show on Friday, December 21 on ITV.

The evening’s entertainment will include mini-episodes of ITV’s leading shows, including a festive Coronation Street with special guest cameos.

Ant & Dec said: “We’re delighted to be returning to host Text Santa again, last year we raised an amazing amount of money and awareness for six truly worthy causes. This year we want to make it even bigger and better and you can get involved too by simply ordering a fundraising pack and putting the fun into fundraising.”

McGuinness commented: “I’m rocking around the Christmas tree at joining the Text Santa team. What a great bunch of people to be working with to host this year’s appeal. Santa has been very kind to me this year and paired me up with Christine Bleakley! What a fantastic way to start the Christmas countdown!”

Viewers will once again be able to donate via text using JustTextGiving by Vodafone, free on any network, allowing 100% of the donation to go to the charities.

ITV director Peter Fincham said: “We’re so thrilled to be working with such fantastic names again and that so many of ITV’s most loved shows are also doing something special for Text Santa. We want to give viewers a real treat in return for their incredible generosity and support of these inspirational charities.”


Jonathan Ross is to host a new film series for ITV.

The television and radio presenter previously fronted the Film programme from 1999 until 2010, when he left the BBC. A new film-based show – produced by Ross through his production company Hot Sauce – will launch on ITV in April 2013.

“The BBC film show is fine, it’s a lovely show but it’s always been what it is – reviews, talking about movies,” Ross told the Radio Times. “We’re doing stuff that is a bit bigger; we’re opening it up a bit more. We’ll do these stunts. In the pilot we had Ross Noble with a dialogue coach trying to do a scene from Jaws.”

Comedian Noble – who will play a killer clown in new horror film Stitches – is one of the first confirmed guests set to appear. Jonathan Ross already hosts his own chat show on ITV1 – The Jonathan Ross Show launched in September 2011 and is currently airing its third series.

The series – from Will & Grace writer Gary Janetti – will star the pair as ageing partners who have lived together in a small Covent Garden flat for nearly 50 years. Retired actor Freddie (McKellen) and ex-barman Stuart (Jacobi) – joined by their feisty best friend Violet (Frances De La Tour) – now spend their days reading books, walking their dog and bickering.

However, the trio’s life together is turned upside down when young man Ash becomes their new upstairs neighbour.

ITV’s Myfanwy Moore said: “‘ITV is thrilled this exciting and bold sitcom, with stellar performers and writing talent is to join the increasing slate of new-look comedy shows on the channel.”

Gary Janetti added: “I’m incredibly excited to be working with ITV and this unbelievable cast!” Vicious has been co-created by award-winning playwright Mark Ravenhill and will be directed by Red Dwarf’s Ed Bye.