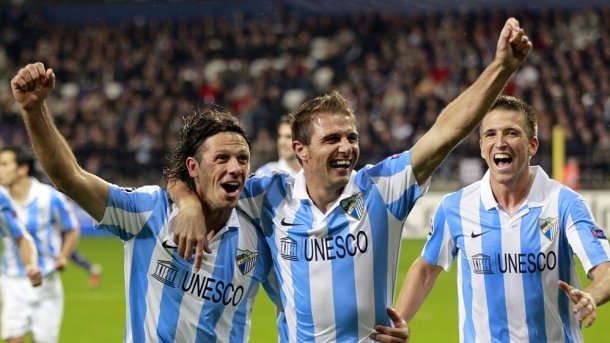 Following Málaga CF’s victory over RSC Anderlecht tonight, where they were the superior team over the Belgian-based side, Manuel Pellegrini’s men continue as leaders of Champions League Group C. Two goals from Eliseu and another from Joaquín, allow Málaga to continue in their fight to qualify for the next round.

Málaga CF started the match in their usual style, which has seen them achieve a great start to this competition, but they came up against a determined Anderlecht who wanted to perform well in front of their fans, on a cold night reaching just 10 degrees, with 90 per cent humidity.

Neither team had a shot at goal during the first 15 minutes of play, however the first came for Eliseu with a powerful shot that went to the left of Proto’s goal.  A chance came for Joaquín in minute 23 from midfield, but the ball went too far to the right of the penalty area, not causing any problem for the Belgian keeper.

Málaga’s first clear shot at goal arrived in the 25th minute, starting with a pass from Saviola to Joaquín, who found himself alone upfront against Proto, but the keeper forced the ball to a corner.  A subsequent header from Demichelis saw the ball hit the crossbar.

Just five minutes later, another pass from Saviola to Joaquín on the left, resulted in a promising shot for Isco from directly in front of the six yard box, but another Blue and Whites goal was scuppered by the Anderlecht defence.

In one of the best moments of the match, Málaga had another chance to get on the leader board first.  A free kick from Eliseu to Joaquín, who then passed to Saviola directly in front of the goal, resulted in the Belgian keeper again forcing a corner kick.

The visitors continued to create a lot of danger around the Anderlecht penalty area, with Proto very active before the half time whistle.  A powerful shot from Eliseu in the 45th minute from outside the penalty area surprised the entire Belgian defence as the ball went straight into the back of the net.  The Blue and Whites were a goal up just seconds before half time.

Anderlecht came out in the second half determined to regain possession and scupper any further goals for Manuel Pellegrini’s men.  The home team created their first shot at goal in the first minute of the second half, but the ball went long.

A long shot from Isco in minute 54 gave Monreal a shot at goal, but an action by Kouyaté in defence led the Hungarian-born referee to award a penalty to the Blue and Whites.  A fantastic shot from Joaquín smashed the ball into the right-hand corner of the goal, making it impossible for Proto to save, and giving the visitors a 2-0 lead.

Soon after, in the 63rd minute, Isco regained possession in midfield and created another chance for Eliseu, who found himself alone upfront against Proto’s goal, to complete his magical night and score Málaga’s third goal, practically sealing their victory against the Belgian-based side.

As Santa Cruz joined the match, he created a chance for Iturra from the left, who worked with Isco against the Belgian defence, allowing the Chilean-born midfielder a shot at goal, but the Anderlecht keeper prevented goal number four for the visitors.

For the remainder of the match, Anderlecht failed to create any further chances at goal, however a header from Gillet in minute 72 kept the Blue and Whites on their toes.  However the arrival of Seba and Duda stirred things up a bit on the counterattack for the visitors during the last part of the game.

Málaga’s three points from this match means they remain UEFA Champions League Group C leaders, with a total of six points.  AC Milan are second with four points after they defeated Zenit by 2-3, Anderlecht with just one point, and Zenit yet to gain a point.