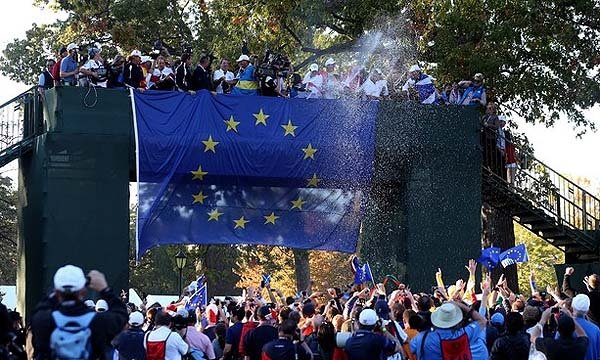 Europe equalled the biggest singles comeback in Ryder Cup history to win The Ryder Cup 14 ½-13 ½ and stun the USA after the most thrilling of final days at Medinah.

Dressed in the colours of the late Seve Ballesteros, Europe tonight pulled off one of his trademark great escapes in what will go down as the “Miracle of Medinah”.

Three games were still on the course. Peter Hanson lost the first of them on the final green, but Martin Kaymer and Francesco Molinari had it in their power to retain the famous gold trophy.

And Kaymer, left out all day on Saturday, was the one to deliver the point they required to match the biggest comeback in the event’s history.

He was up against Steve Stricker. Level with two to go, the American bogeyed the short 17th after hitting his chip far too strongly.

Kaymer, bunkered off the final tee, found the green and had two putts for it once Stricker missed his long birdie attempt.

He gave himself and his team-mates palpitations when he sent his first one six feet past, but 21 years on from compatriot Bernhard Langer missing from the same distance to lose at Kiawah Island Kaymer made the one back and sparked jubilant scenes.

Moments before Molinari had fallen one down to Tiger Woods by bogeying the 17th himself, but suddenly it did not matter. The Cup was going back across the Atlantic.

A tearful Olazábal said: “When I saw we had a chance coming down the stretch I was very emotional. The boys have done an unbelievable job. I have a few thoughts for my friend Seve and this one is for him.

“That’s why I’ve always said that this event is so special. Last night I told them I really believed we could do it and they just believed in themselves. That’s why we’re here as winners.”

Stunned American Captain Davis Love said: “I would not have done anything differently. They played great.

“When you lose a segment (session) that badly it’s going to cost you.”

The four-point overnight deficit became three when Luke Donald beat Masters Tournament Champion Bubba Watson 2 and 1 in the top game. It was a massive relief after he led by four with four to play.

Scot Paul Lawrie beat Sunday’s FedEx Cup winner Brandt Snedeker 5 and 3 – he was six under par with an eagle and four birdies – and Rory McIlroy then saw off previously unbeaten Keegan Bradley 2 and 1.

That was not the World Number One’s only drama of the day, though.

As the singles began word reached everybody that McIlroy, out in the third game, was nowhere to be seen around the course.

Olazábal admitted his heart had been “racing quicker than expected” until McIlroy teed off and added: “We did not have that in mind.

“All of a sudden we realised Rory was not here and started to look for him. Finally we got hold of him and he came in.”

It was reported the Northern Irishmen had seen a 12.25pm tee-off time on television, but it was Eastern Time – one hour ahead of Chicago.

After his win McIlroy said: “I was just casually strolling out of my hotel room when I got a phone call saying you have 25 minutes.

“I have never been so worried driving to the course. Luckily there was a State Trooper outside who gave me the escort – if not I would not have made it on time.”

Poulter, whose finish to the second session of fourballs really inspired the comeback, made it four wins out of four – and 12 wins in his last 14 cup games – beat US Open Champion Webb Simpson on the last after being two down early on.

They were level with two to go, but Simpson failed to get up and down from a bunker on the short 17th and could not grab the birdie he needed on the last.

Rose’s second win over Phil Mickelson in his cup career came in amazing fashion. He trailed by one with two to play, but holed from 40 feet on the 17th and 14 feet at the last.

Mickelson, America’s record cap-holder and winner of his first three games, could only stand and admire – and graciously applauded everything Rose did at the end.

Mickelson can still consider himself to have had a good week.

The only previous side to win from four down entering the singles was Ben Crenshaw’s in Boston in 1999 but Europe have arguably trumped that with this most incredible away win.