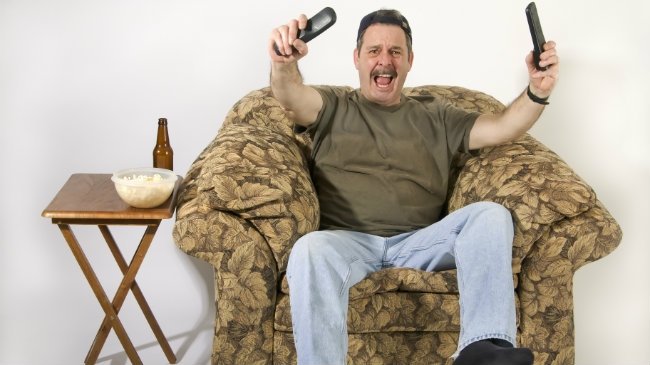 IN a recent UK medical journal, the British were labelled one of the laziest populations in the world. Lazier even than the Americans, a nation not known for their love of walking. Anywhere. Twice as lazy as the French. More than 63 per cent of Brits fail to get off their butts to carry out the recommended 150 minutes of weekly activity needed to maintain basic good health.
Now, why are the British less active as a nation? I’d say the weather has something to do with it. I mean, who really enjoys going for a nice jog in the rain or snow? Then, there’s the distance to work, invariably necessitating a bus/train/car journey. Labour-saving devices such as washing machines and lighter vacuum cleaners play their part as well. And just being plain knackered from working longer hours and more days than anywhere else in Europe might have a lot to do with it, too!
But the killer? It’s got to be the TV. More than anything else, it welds a significant number of the population to the couch. Keeping up with the ‘soaps’ to be able to converse with peers. Or the latest reality/makeover show to see people cry because they’ve just sung for their sick mum, or because they’re remembering their dead cats, or because they’ve just been made over by Gok.
That such idleness results in sickness – often major health problems – isn’t surprising. It isn’t surprising either that it results in a massive load on the NHS and the Exchequer.
Now, I’m not suggesting Brits hurl themselves about like rippling-muscled Olympian athletes. On the contrary, an acquaintance has a couple of simple ‘rules’ he sticks to. He uses the car as little as possible. Once parked, the car stays parked. The rest is done on foot, by bike or public transport. He never take lifts or escalators where there are stairs.  Oh, and he walks a couple of kilometres a day. No big deal, but he does it every day… and that’s what counts.
So, you could be spending your next twenty years being spoon fed by a nurse after a massive stroke. Or, if you exercise, spend the next twenty years chasing the nurse at Bradley Wiggins-speed around the front room. Your choice!
Nora Johnson’s thrillers, ‘Soul Stealer’ & ‘The De Clerambault Code’ (www.nora-johnson.com)  available from Amazon in paperback/ eBook (€0.89; £0.77) and iBookstore. Profits to Cudeca