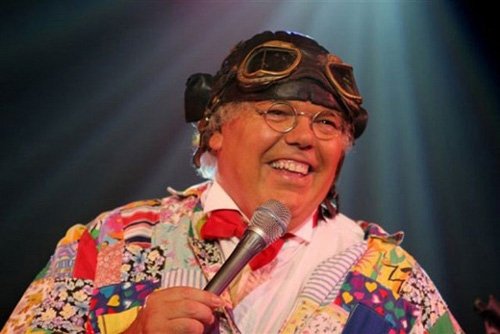 FORTY three years in the business, Roy ‘Chubby’ Brown is a constant and iconic figure in the British comedy scene. Performing in Benidorm and Orihuela earlier in the week, his short Spanish tour was a raving success, reporter Paul Deed reports.

You love your work don’t you?

I always say when people are laughing, they’re not fighting. I’ve never once not signed an autograph, or refused a picture.

I appreciate everyone who pays their hard earned money to come and see me. I don’t take anything for granted and I love my fans.


And you’re here with your regular team:

We’re a family really, we’ve all been together for years, Ritchie handles the business side, he’s married to one of the Nolan sisters- Maureen.


Scott Owen, he does all my sound, and Keith (Hammersley) here, he’s been with me years, he’s a professional singer too.

In the UK we are about 10-14 guys depending on the size of the gigs.

It takes a lot of organizing, people don’t realize that.

And we’re a great team. Lovely bunch of lads. Even my son is here helping with security.

On playing Spain before:

35 years ago at Talk of the Coast. Johnny Hackett compered.

The owner had his head in his hands when he met me at the airport.

Poor bloke had his place trashed the night before because he’d got the date wrong and everyone turned up a night early.

We did the gig anyway, and it was really great.

On keeping fresh with new routines over four decades:

Every day I go through all the papers. I’m always looking for topical material, and often I’m ahead of the audience.

When Lady Diana died, I was on in Blackpool.

I started my routine by saying how sad it was about Lady Di, and half the audience had been on the beach all day and didn’t know.

They thought I was going to crack a joke, but I was being sincere. I’ve found it’s best to wait three days to bring in the topical gags, otherwise the audience aren’t with you.

It has to be the Palladium. In front of her Majesty? (unfortunately) no.

I did my autobiography a few years back, and people kept saying what about this story, and that story, so I took two years to put together a compilation of 60 short autobiographical stories, all true, and funny, and the book came out last month.

How many gigs a year?

And all over the world too?

Yes, packed them out in Oz, and we’ve done New Zealand, Canada, Hong Kong. I did New York a few years back.

They loved me. I did my research first, always know your audience.

Told them I was a friend of the Beatles, and when I was questioned on it, from the stage I recited 80 odd Beatles song titles.

They offered me two years work, but I said no thanks, I had to come home to the UK.

It did it with Bobby Davro, and with Brian Connelly, and lots more. It takes what you’ve got, then dumps you.

It’s not good for what you could call standard comedians like me to do TV. I’ve never changed my routine. Times have changed.

I keep my stuff topical whilst having a core routine that I use, and audiences are basically the same. Before there was a north south divide, but not anymore.

How did you get into the business?

I always loved music, and making people laugh. I left home when I was 14.

My family broke up and I had to get out. I did every kind of job to keep going, plastering, bricklaying, red leading, bar work, you name it I’ve done it.

Then I got into a double act with an impersonator, we were called Alcock and Brown.

He left because he thought he was the talent in the act.

I went on as a solo artist, and the rest is history.

When I was 35 I remember seeing Gilbert O’Sullivan play piano with what looked like one finger.

I thought ‘I can do that’ , so I bought a brilliant book by a guy called Mel Bay, “Teach Yourself Chords.” And taught myself from there. Now I play and sing in my routines.

I’ve four pianos at home, even got a Steinway, and a recording studios in my house.

In my spare time I love to write music, I mean proper songs, serious stuff. It’s my way of relaxing. I’ve composed scores of songs.

You’re 67 now. Ever think of retiring?

It’s always in the back of the mind.

Forty three years is a long time, but to be honest I don’t know what I’d do. I was on holiday with the family recently, and all I did was tick over with new material, you can’t help it.

All I wanted to do was try it out on people, so I was a bit frustrated, because the family aren’t a real audience. So retirement? I don’t know. I have to look after my throat though.

I had throat cancer in 2002, and it’s a strain doing so many live gigs, so I need to take care of my voice. That’s the one thing I worry about.

Most people don’t realize how respected and popular you are in the business :

Yes. It’s nice to be appreciated, and to be liked, especially by your peers.

When I got married to my third wife in Vegas 16 years ago I was ill and got messages and calls from all my mates, Tom Jones, Bernard Manning, Norman Vaughn, and Bob Monkhouse.

He was on holiday in Barbados with Russ Abbot and they called me when they heard, to wish me well.

Makes you feel good when people care. And amazingly I’ve 64,000 fans on my facebook page!

Finally Roy, How would you like to be remembered?

Roy Laughing – in your will!