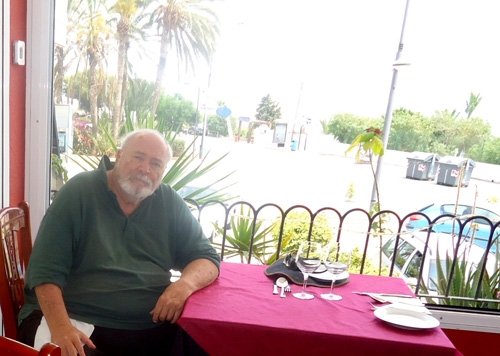 MY early years in Spain were under the dictatorship of one Francisco Franco, aka el Caudillo.

If you were a bad guy, you needed to fear him in the upmost.

His para-military police force the, Guardia Civil, didn’t make a lot of arrests.


Nor were there countless trials in defence of causes, people, or situations.

A favourite bar in Madrid displays a wall tile that summarized the situation.


It depicts a man with a padlock on his lips (meaning no singing or outrageous comments).

The word ‘dictator’ sent electronic shocks coursing through your nervous system because, if you ‘allegedly’ did something incorrect, it was already a forgone conclusion that you would shortly be convicted.

No arrest, no trial, straight to prison in those days. Stories abound and can be told for hours.

The local gypsies in Turre have some real whoppers that always seem to hold just enough factual truth to make one fearful that they actually happened.

Even to this day they won’t speak easily of those Franco days and still remain “on guard” when discussing the issue.

Francoism had instantaneous power over every facet of life.

As long as you didn’t annoy or even step on the shadow of one of Franco´s institutions—you were OK.

Here is a picture recently taken of me sitting in the exact same position as I was 43 years ago.

Today it is a good Indian restaurant, Azeefa. I handled my paper work from the La Gaviota complex.

I soon became captivated by a happening that occurred every day at around 10am, give or take an hour or two.

A most fascinating movie scene enacted daily for my viewing enjoyment.

A civil guard, barely motoring fast enough to keep going forward, wearing a long cape, armed to the teeth and toting an outrageous silly hat, passed by my window.

Following days of his torment, I could no longer bare the absurdity of it all and got my camera ready, rushed out, and snapped photos of him.

He became instantaneously outraged; which made my situation even funnier!

He got off his ancient scooter and started jabbering, the machine gun pointed at me which sent me straight into fits of uproarious laughter. It was a truly comic sketch worthy of Chaplin.

Finally he drove away screaming at me as I remained prone on the pavement gasping for air and wiping away the tears of uncontrolled pleasure.

This little tiny guy, dressed like some sort of clown with a machine gun on his shoulder, belting down the road on a decrepit motorbike, even thinking he belonged to the reality of this planet was a situation too funny to be contemplated.

The day went on and I left to complete an errand.

An hour later, the steps of the La Gaviota complex were swarming with armed Guardia lacking only cannon in order to subdue the culprit.

Intermingling amongst the onlookers, I quickly ascertained it was me they were searching for.

I decided to exit stage left and retreat to the mountain home of the infamous Don Luis.

Luis was our sanctuary on five different occasions until Franco passed.

He was perfect gentleman’s company and brimming of scintillating tales of past rejections to Franco and the military regime.

Luis’s father had been governor of Almeria and a famed person in his own right. Luis had trained as a lawyer, just long enough to figure out what he was doing, sued Franco, and won over a million dollars, which allowed him to live the life of a true caballero, raconteur, town dandy, and gallant the rest of his life.

He was one of those extremely well spoken movie actor types that you meet at 4 or 5 in the morning in some distant bar far from trees. He could drink more whisky than any ten men I knew and usually had plenty of companions to aid him.

He always paid. His house has gone to ruin now.

It was on the outskirts of Antas, surrounded by orange trees and with two beautiful white prancing Arabian horses bounding about through the grove.

Luis loved to argue and in spite of his absolute generosity, managed to create a few disgruntled friends. He always paid in cash, but as the years wore on he became nasty which was not the kind of personage he really was.

When he died the villagers looted his house in retribution for his insults. Franco built the greatest tomb and testament to his “pharaoh-ness” the world probably will ever see.

The sanctuary was topped off by the erection of the largest cross in the Christian world, 108 meters high that actually sways in the breeze and can be seen from 50 kms.

If you haven’t visited the Valle de los Caidos (Valley of the Fallen) near Madrid, you won’t be able to bear witness to Spain’s longest ruling personage.

His tomb was declared a ‘Basilica Menor’ by Pope Juan XXIII.

Yet, major academic forces still argue long into the night trying to change the entry of his name in the Real Academia Española so that he will not be listed as a “dictator.” Consequently, dual entries are being made, the other “benevolent ruler”.

Nevertheless, once you’ve visited the place, you’ll leave with a very good and thoroughly implanted thought about what powers a true dictator can command.

And of course, why he was so feared!