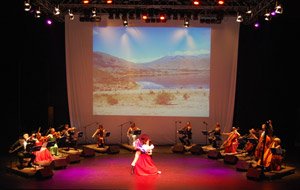 COMPANY ARCOS DE BUENOS AIRES are hold their “LA PORTEÑA” – MUSIC AND DANCE SHOW on 12 November at Teatro Vicente Espinel in Ronda at 9pm and on 13 November in Benalmadena at the Moonlight Concert Hall at 7pm.

The Company is conducted by the prestigious violinist and conductor Walter O Tejeda Carranza ,introducing the show “La Porteña”, an Unique combination of music and dance with 17 artists on stage performing Argentinian Tango and Argentinian Folk Music and Dance.

Arcos de Buenos Aires is the Unique String Chamber Orchestra making Tango and Argentinian Folk in concert accompanied by the ballet. A trip to the Argentina´s heart.

In these moments Arcos de Buenos Aires is the Unique String Chamber Orchestra that makes Argentinian Tango and Folklore in concert with this show for all the publics.

Ticket are 10 Euros each and you can reserve your Tickets on 654 57 63 63 (for both concerts) and tickets will also be available two hours before the concert in the theatre box for Benalmadena: tickets will be sold and reservations in the Sunset Beach Club (952 57 94 00)