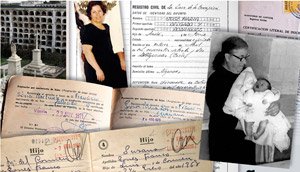 UP to 300,000 babies in were stolen from their mothers and sold for adoption since the 60s, according to unofficial figures quoted by Angel Nuñez of the Justice Ministry.

The number of cases could account for up to 15 per cent of total adoptions between 1960 and 1989 in , according to experts.

The practice started during the Franco regime and continued for 15 years after his death until the early 1990s and involved a network of doctors and nurses linked to the Catholic Church.

Mothers – often young or unmarried – were told at hospitals and clinics their children had died soon or after birth, but these were sold on to childless Catholic couples with financial stability.

This was revealed in a new documentary ‘This World: ’s Stolen Babies’ by journalist Katya Adler.

Several adoptive parents were not aware the babies had been stolen. Until 1987 Spanish hospitals controlled adoptions and not the government. Despite 900 cases currently under review, the government has not launched a national investigation into the case.

Katya Adler said: ‘There is very little political will to get to the bottom of the situation.’

In an interview with a woman, 89, featured in the documentary she admitted a priest encouraged her to fake a pregnancy so she could be given a baby girl due to be born at Madrid’s San Ramon clinic in 1969. ‘The priest gave me padding to wear on my stomach,’ she said.

In alone there have been more than 80 reports of possible ‘stolen babies’, most of them from the 60s and 70s, from families with limited resources.

Most of the babies were born at the , although there are some reports of babies born at Carlos Haya and the hospitals in Ronda and Antequera. Many documents from the were lost in floods in the eighties.