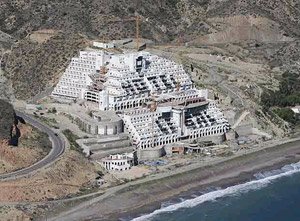 ECOLOGISTAS en Accion have again written to the Junta de Andalucia and to demand that the Algarrobico Hotel be knocked down.

The environmentalists refer to the Supreme Court sentence which indicates that the hotel is built on non-urban land and demand that Andalucian Urban Discipline Laws be obeyed.

They claim that the town hall and the mayor, Salvador Hernandez, are disobeying the law by maintaining the sector on which the hotel was built as urban land.

The Supreme Court’s sentence supports the one issued by the Andalucian Supreme Court of Justice which ordered that the area should maintain the level of protection which it had had until 2008 thanks to the Natural Resources Development Plan for the Cabo de Gata Nijar Natural Park which was passed in 1994.

In August 2009, when socialist Cristobal Fernandez was mayor, part of local regulations which classified the area as urban were approved.

Ecologistas en Accion says “the Junta has no excuse not to demolish the hotel” and hopes that they will do their legal duty by knocking it down before November 20.