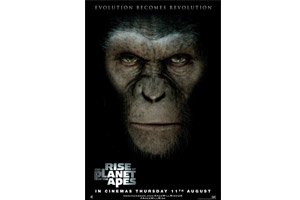 The war for supremacy begins with an act of compassion. A single act of both compassion and arrogance leads to a war unlike any other — and to the Rise of the Planet of the Apes.

Gen-Sys has been trying to develop a cure for Alzheimer’s disease by testing a genetically engineered retrovirus on chimpanzees. The virus mutates the chimps, giving them a human level of intelligence. The most successful subject, a female chimpanzee named Bright Eyes, goes on a rampage because she believes her baby is threatened.

She is killed disrupting a board meeting where Will is presenting the cure. Will’s boss orders all the chimpanzees be put down but cannot bring himself to kill the baby and gives him to Will, who raises him in his house. Caesar has inherited his mother’s high intelligence and learns and develops quickly.

This is a completely new take on one of the Studio’s most beloved and successful franchises. Oscar-winning visual effects house WETA Digital will render, for the first time ever in the film series, photo-realistic apes rather than costumed actors.

“Rise of the Apes” is an origin story in the truest sense of the term. Set in present day , the film is a reality-based cautionary tale, a science fiction/science fact blend, where man’s own experiments with genetic engineering lead to the development of intelligence in apes and the onset of a war for supremacy.

“Rise of the Apes” is one of the best films of this summer, and although the whole concept is not new, it is a clever and entertaining film which complements its predecessor.