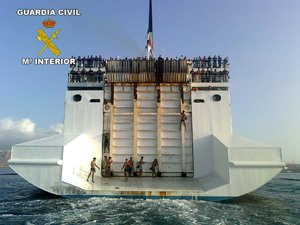 GUARDIA CIVIL from Almeria prevented nine stowaways from reaching Spain after they were detected on the stern of the Berkane ferry from Nador, Morocco.

The officers went out to sea and intercepted the ferry, preventing the nine Moroccan men from jumping in the water to swim ashore. They were taken to Almeria Port and later to the National Police station where procedures will be carried out to return them to Morocco.