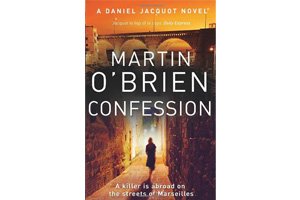 Elodie Lafour, teenage daughter of wealthy Parisian parents, disappears.  Another Parisian girl of similar age is found dead in Marseille.  Elodie’s aunt, a Marseille magistrate, summons Chief Inspector Daniel Jacquot from his dead end posting in Cavaillon back to Marseille, his old stamping ground, to go under cover to search for her niece.  But he is not the only one looking for her.  Virginie Cabrille, daughter of a local gangland godfather also wants to find the girl before she is shipped abroad for the sex trade. Cabrille’s strange reason for this only becomes evident at the culmination of the fast moving narrative.

This is O’Brien’s fifth book featuring the Provençal detective, but there is no need to have read the preceding stories to appreciate this superbly plotted novel. Jacquot, although conforming to the well-worn maverick cop role, is a well-rounded and attractive character.  His love of the finer things in life, wine and food, is described in detail: lunch always takes precedence over following a lead.  Despite being English, O’Brien infuses his prose with a passion for Marseille and its people that one would only expect from a native.  The vivid and lyrical descriptions of the old port provide a perfect backdrop for the sexually-charged atmosphere of international crime.  The story, like the food, is strongly-flavoured, surprising, served up with relish and not for the faint-hearted.

This book, together with around 2000 more, can be borrowed from THE DENIA ENGLISH LENDING LIBRARY, Passeig del Saladar 91.  Open Monday to Friday 10.00 – 1.00.  For further information contact megantell@gmail .com

The UK Denies Venezuela Access to Gold for Food and Medicines