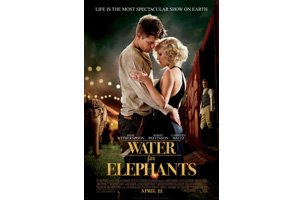 BASED on Sara Gruen’s acclaimed bestseller, ‘Water for Elephants’ is the story of an unexpected romance in a uniquely compelling setting. During the Great Depression, Jacob, a penniless and recently-orphaned veterinary school student, parlays his expertise with animals into a job with a second-rate travelling circus.

He meets and falls in love with Marlena, one of the show’s star performers, but their romance is complicated by Marlena’s husband, the charismatic but unbalanced circus boss.

They discover beauty amidst the world of the Big Top and come together through the compassion they feel for a special elephant named Rosie, the circus’s main attraction.

In this film adaptation, not only does Jacob (Robert Pattinson) have little or none of the mystical connection he shares with Rosie in the novel, but there is also a lack of chemistry with Reese Witherspoon, who plays Marlena, which makes it very hard to believe that the two have found an undying love despite everything they have against them.

Luckily, Christoph Waltz, as Marlena’s husband, brings a little fire to the movie, but the production focuses more on the love triangle between the three characters than it does on portraying what life with a circus was like in that era, and the special connections which can be made between humans and animals.

Pattinson puts his ‘Twilight’ character behind him and puts in a performance which could possibly help to land him more roles as a Hollywood leading man.

Witherspoon is also convincing as a tough young woman who has experienced life’s hardships and has been made stronger by standing by her abusive husband. Unfortunately, she isn’t given many opportunities in this film to prove her talent.