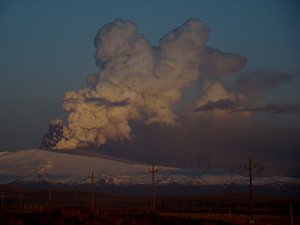 As the ash cloud from the Icelandic volcano drifts towards airspace, thousands of air passengers could face severe disruption and cancellations. BA have already cancelled flights between London and Scotland and travel plans have been thrown into chaos in the north of England as the cloud of ash from the Grímsvötn volcanic drifts southward.

Forecasters are predicting that much of the could be covered by midday today.

Transport Secretary, Philip Hammond said Britons had “to learn to live” with the ensuing chaos from volcanic activity.

“My understanding is that we have gone through an unusually quiet period for volcanic eruptions in over the last 20-odd years and we are moving into a period when there is likely to be significantly more volcanic activity.” He told BBC2’s newsnight.