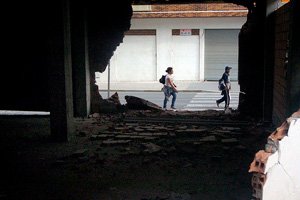 The two earthquakes that rocked the town of in , on Wednesday has left much of the town buildings structurally unsafe. Conflicting reports have been emerging since the quake happened as to the real extent of the damage with reported figures fluctuating wildly.

The most reliable data to date was reported by the Minister of Public Works and Planning, José Ballesta.

A special marking scheme had been implemented on the buildings that had been properly surveyed and were marked in red, yellow, or green.