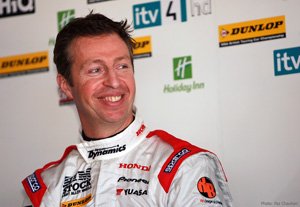 MOTOR Sport fans are being well looked after in 2011 by Spectrum FM. On the Monday morning after each Grand Prix (shown live on 1) John Fitzpatrick will be live on air to give his knowledgeable review of the race. John’s credentials includes winning the British Touring Car Championship, The Porsche Carrera Cup, the IMSA GT Championship in the as well as a regular at the Le Mans 24 Hour Race for Porsche and running Silverstone Race Circuit.

He also writes his own motorsport blog at www.johnfitzpatrick.co.uk . With his insider knowledge and access to the teams his review is always on the money and he is not adverse to being controversial and already this season he has raised concerns over the Pirelli tyres which he thinks are detrimental to the purity of the sport. He is a vociferous advocate that the best driver and the best car should win.

Also on Monday’s after each weekends three rounds in the British Touring Car Championship (shown live on ITV4) current driver and double BTCC champion Matt Neal will be on air to discuss the weekends races and how he is faring this year in the Championship.

Currently lying second he is arch rival of Jason Plato the winner of last seasons BTCC. Now racing for the Honda Racing Team Matt also holds the accolade of being the first privateer to win a round in the BTTC when he did so in 1999 winning £250,000 for his trouble.

You can tune into Spectrum FM on 92.6FM in Almeria North, 104.4FM in Almeria South or anywhere in the world at www.costaalmeria.spectrumfm.net. Also on the website you can hear John and Matt’s previous interviews via podcast.