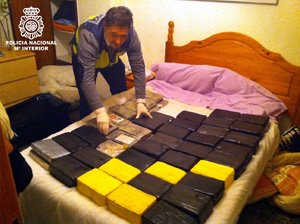 THE economic crisis affecting many aspects of Spanish life has spread to drug-taking, with a drop in arrests made last year and fewer drugs seized. Ecstasy and amphetamines were the only exceptions, with police seizing twice as much as in 2010 although there had been little change in intercepted cocaine while the amounts of seized heroin had fallen, said Spain’s Centre of Intelligence against Organised Crime (CICO).

Police anti-drugs operations averaging 1000 per month were 7 per cent fewer than last year, found the CICO after coordinating information from the National Police, Guardia Civil and Customs and Excise agents in all Spanish regions bar Cataluña and the Basque region.

The 17,878 arrests made in 2010 – around 49 a day – were the lowest in four years, with more people detained for offences connected with hashish or its derivatives than any other drug.