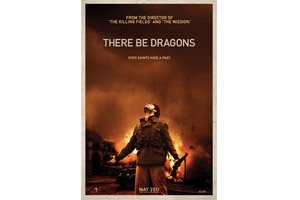 There Be Dragons is an epic action-adventure romance set during the turmoil of the Spanish Civil War. London-based investigative journalist Robert Torres visits Spain to research a book about Jose Maria Escriva (Charlie Cox). But Robert hits a wall, both professionally and personally, when his most promising source — his own father, Manolo Torres, turns out to be his least cooperative one.

The story then traces the lives of two young men, Jose Maria and Manolo (Wes Bentley), childhood friends who attended the same seminary and are separated by the political upheaval of pre-war Spain to find themselves on opposite sides as war erupts.

Manolo chooses war and becomes a spy for the fascists. He becomes obsessed with a beautiful Hungarian revolutionary, Ildiko, who has joined the militia in pursuit of passion and purpose. But when Ildiko rejects him out of love for the courageous militia leader Oriol, Manolo’s jealousy leads him down a path of betrayal.

As personal and national battles rage, the characters’ lives collide and their deepest struggles are illuminated through the fateful choices they make. Each will struggle to find the power of forgiveness over the forces tearing their lives and friendship apart.

There Be Dragons director Roland Joffe has previously directed the highly acclaimed films The Mission (starring Robert De Niro and Jeremy Irons), and The Killing Fields.