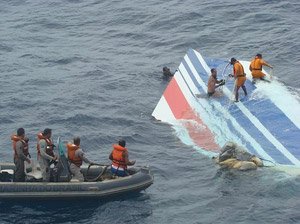 PART of the wreckage from Air France flight AF447, which went down when travelling from Rio de Janeiro to Paris flight June 1, 2009, has been found at the bottom of the ocean. The French government reports that large parts of the fuselage, the engines and even identifiable bodies, still strapped into their seats, have been found nearly four kilometres down in an area known as the mid-ocean ridge, preserved by the freezing temperatures.

One important discovery is that oxygen masks had not deployed in the cabin, indicating that the plane had not lost pressurization before it hit the water.

According to France’s transport minister, Nathalie Kosciusco-Morizet, the bodies will be raised in the coming weeks.

This search, which began on March 18, is the fourth attempt to find the aircraft, which crashed with 228 people on board.

The discovery raises hopes that investigators will be able to recover the missing black boxes that could explain why the Airbus A330-200 crashed.

The Bureau of Investigation and Analysis (BEA) has said that the priority is still finding the black boxes, although the man in charge of the recovery operation, Alain Bouillard, has said that there is no way of knowing what state they will be in, as there has never been a case in which they have remained undiscovered for so long. The black boxes only send out a signal for one month after the accident.

The search is being paid for by Air France and Airbus, who have invested some €20m.

Both companies have been charged with the involuntary manslaughter of the 216 passengers and 12 crew members on board.