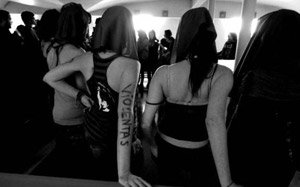 FOUR students were arrested after participating in an anti-Catholic protest at a chapel at a university. During the protest some of the approximately 50 youths stripped off naked down to their waist. The chapel is located on the campus of the Universidad Complutense Somosaguas in

Those arrested were two girls and two boys, and more arrests are expected, a police spokesman said.

The students, from the Faculty of Politics and Sociology, are accused of ‘crimes against freedom of conscience and religious sentiment.’ The complaint had been filed by the pastor of the chapel and several parishioners present at the time.

On breaking into the chapel on March 10, the young protestors read out anti-Catholic texts that the Archbishop of Madrid considered offensive against the Church.

One of the young women carried a poster of the Pope with a Swastika superimposed in place of a cross.

The incident was widely reported as being organised by Communist-inspired student association, Asociacion Universitaria Contrapoder (AUC), in conjunction with university lesbian and gay association RQTR.

Minister for Education, Angel Gabilondo, condemned the incident describing the protest as “inappropriate.”

“It is reprehensible and nonsense that someone should not respect the belief of others,” he said.

Meanwhile, in a joint statement AUC and RQTR denied organising the protest, but stated it identified with “its content, criticism of sexist and homophobic attitudes defended by the Catholic Church and its presence in public and secular spaces like the university.”