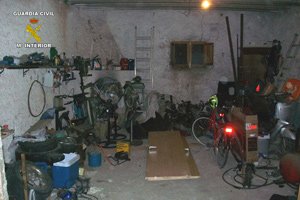 GUARDIA CIVIL from Fiñana arrested a 26-year-old man charged with 11 different crimes. They included car theft, theft from inside a car, document forgery and identity fraud. The investigation has been in place for 18 months, since several cars were stolen in city and sold on after being camouflaged.

The detainee has a record for crimes against public health and aggravated robbery, and has been remanded to prison.