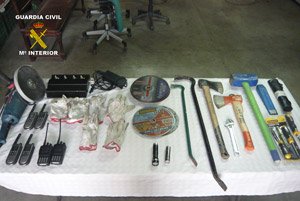 GUARDIA CIVIL have arrested four men, aged between 29 and 35, for illegal association and robbery. The officers learned that a group of men from Kosovo, whose sole activity was theft, were operating in the area, and an investigation was launched in August last year.

They targeted small warehouses, shops and houses in small, quiet areas, and are believed to be responsible for robberies in Vera, Alcontar, Pechina, Berja, Antas, El Ejido and , as well as others in , and .

The suspects were placed under surveillance and substantial evidence gathered against them.

One of the detainees has an extensive criminal record for similar crimes.

Top News
Protesters have hurled objects at police and damaged properties amid anger following the acquittal of Kyle Rittenhouse, the teenager who killed two people and...