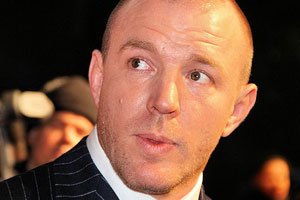 At least 12 people have set up home at the ‘Sherlock Holmes’ director’s new property in the upmarket Fitzrovia area of the British capital, while it is being renovated. The group, who call themselves the Really Free School are thought to have got inside the house over the weekend and have hung banners in windows reading “occupy”, “resist” and “strike”.

They also claim they will offer lessons in squatting, anarchy and tarot reading from the building.

Guy, 42, bought the five-storey house in May 2010 as well as the adjoining property, so he could convert the houses into one huge mansion for him and his girlfriend Jacqui Ainsley.

The squatter group are refusing to leave the property, ignoring police requests at the weekend, and have even advertised online for more people to join them.

The advert read: “We need occupiers for tonight! Will be film showings in the new cinema. Come sleepover in the most rah property in London (sic).”

Another post in one of the windows of the house read: “‘Legal warning. Take Notice that we live in this house, it is our home and we intend to stay here.”

It is not known whether Guy is aware of his unwanted guests, and a spokesperson for the filmmaker has so far refused to comment on the situation.

A spokesperson for building contractors carrying out wok said: “This property has not been empty. We’ve had workmen in there as recently as Friday (11.02.11). Our scaffolding is in there. It’s not safe to be in at all.”

Spanish town named among Top 10 most beautiful in Europe