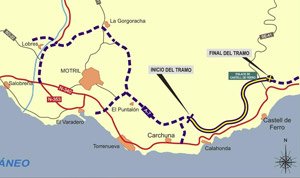 THE Minister of Public Works, Jose Blanco, admitted recently that the A-7 stretch of motorway between Carchuna and Castell de Ferro, is a problem spot. It is still not known when work on the area, which is just after Adra () on the way to , will start, but it is believed that it will once again be put out for public tender.

This 10.1 kilometre stretch is the only part of the A-7 which remains to be completed and until it is, the motorway will not be able to run through province.

The entrances to the works were closed off last spring, and no-one has been seen working there since. However, there is no official explanation for this.

Residents in the area, who confirm that work has stopped, believe that the problem could be the instability of the land, which falls away when it gets wet.

The original route was approved in March 2008, but Izquierda Unida revealed that the company which had been paid to carry out the studies prior to the works had detected ‘serious geological and geotechnical problems’, as well as the risk of landslides.

One possible solution may be to take the road further to the north to avoid the unstable areas, but it is estimated that this would cost an extra €1.8m. Plus, the alternative route also presents problems such as the fact that it enters an area inhabited by the mountain goat, in danger of extinction, and would interfere with protected thoroughfares. It would need 50 per cent more earth movements than originally planned, and would mean the compulsory purchase of eight more hectares of land.

Therefore, it appears the Ministry of Public Works will go back to the original plans, but no-one dares to even guess how long it will be until , and will be connected by motorway.