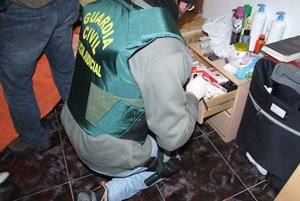 FOUR people have been arrested and nine women who were forced into prostitution freed in an operation in province. Guardia Civil launched the operation, codenamed Obo, when a 19-year-old Nigerian woman living in Roquetas de Mar was taken to hospital after suffering a brutal attack in December.

The victim had recently given birth and claimed she had been beaten because she refused to continue working as a prostitute.

Two people were arrested for white slave trade, crimes against sexual freedom and grievous bodily harm. The locations where they were forcing the victim into prostitution were put under surveillance, and the two new managers of the illegal activities identified.

When the officers raided the premises, both were arrested, documents were seized and nine Nigerian women aged between 21 and 37, all of whom were living in illegally, were freed.

They were contacted in Nigeria and promised work and board, then brought by land to Morocco, and then by boat to Algeciras, where they were met by members of the organization, who brought them to Almeria, where they were made to pay off a debt of €30,000 through prostitution, with threats made against their families if they refused.