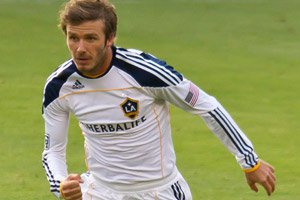 David Beckham came to the aid of a stranded British motorist. The soccer player stopped in the rain to help Paul Long and his two children when he spotted him trying to move his car off a busy main road in Ware, Hertfordshire, South East England, after it broke down while Paul was on the school run.

Mr. Long told UK station BBC Radio 5 Live: “The car packed up as we approached a roundabout over the A10. After 10 minutes a car pulled over and a figure got out wearing a hoodie. As he got nearer it sort of slipped down and it became apparent it was David Beckham.

“I could only see his car in the distance, it looked like an Audi but I could not be sure of that. It wasn’t flash.”

Soccer fan Mr. Long admitted he was surprised the 35-year-old superstar sportsman – whose house is situated near the A10 – would take the time to help out a stranger.

He said: “I have always admired him but I’m his biggest fan now, although I feel a bit stupid that I told him I loved him.

“He’s a genuinely top guy especially as he braved the rain to do what he did.”