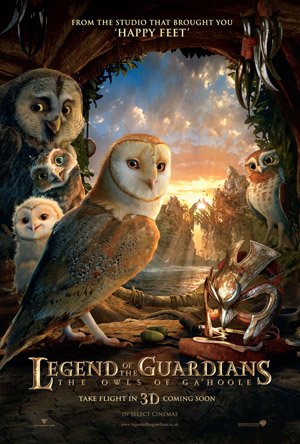 ACCLAIMED filmmaker Zack Snyder makes his animation debut with the fantasy family adventure “Legend of the Guardians: The Owls of Ga’Hoole”, based on the beloved books by Kathryn Lasky.

The film follows Soren, a young owl enthralled by his father’s epic stories of the Guardians of Ga’Hoole, a mythic band of winged warriors who had fought a great battle to save all of owlkind from the evil Pure Ones.

While Soren dreams of someday joining his heroes, his older brother, Kludd, scoffs at the notion, and yearns to hunt, fly and steal his father’s favour from his younger sibling.

But Kludd’s jealousy has terrible consequences, causing both owlets to fall from their treetop home and right into the talons of the Pure Ones.

Now it is up to Soren to make a daring escape with the help of other brave young owls. Together they soar across the sea and through the mist to find the Great Tree, home of the Legendary Guardians, Soren’s only hope of defeating the Pure Ones and saving the owl kingdoms.

Snyder directs the film from a screenplay by Emil Stern and John Orloff.

The film is being produced by Zareh Nalbandian and presented by Warner Bros. Pictures in association with Village Roadshow Pictures.

The film will also be showing in 3D format.