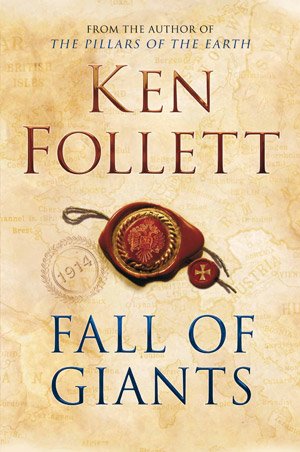 By Ken Follett – FALL OF GIANTS follows five linked families through the world-shaking dramas of the First World War, the Russian Revolution, and the struggle for votes for women. The story opens in 1911, on the Coronation Day of King George V—but the novel focuses on thirteen-year-old Billy Williams as he works his first day in a coal mine.

The Williams family is linked by romance and enmity to the Fitzherberts, aristocratic coal owners.

Lady Maud Fitzherbert falls in love with Walter von Ulrich, a spy at the German Embassy in London. Their destiny is entangled with that of Gus Dewar, ambitious young aide to U.S. President Woodrow Wilson. Equally involved are two orphaned Russian brothers, Grigori and Lev Peshkov, whose plan to immigrate to America falls foul of war, conscription and revolution.

In a plot of unfolding drama and intriguing complexity, Fall of Giants moves seamlessly from Washington to St Petersburg, from the dirt and danger of a coal mine to the glittering chandeliers of a palace, from the corridors of power to the bedrooms of the mighty.

As always with Ken Follett, the historical background is thoroughly researched and explained, but never distracts from the fast-moving action and emotion of an absorbing narrative.

After writing several more successful thrillers, Ken Follett surprised everyone with The Pillars of the Earth, about the building of a cathedral in the Middle Ages.

The historical intrigue of European politics of the time are fascinating. In this reviewer’s opinion, it is a blend of classic Follett spy story with the elaborate storytelling of Pillar of the Earth.