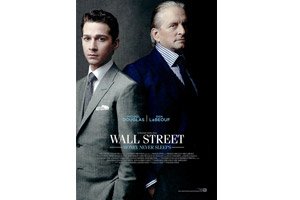 Michael Douglas is back in his Oscar-winning role as one of the screen’s most notorious villains, Gordon Gekko. Who emerging fresh from a lengthy prison stint, finds himself on the outside of a much harsher financial world than the one he left and once dominated. He now has to play catch-up and redefine himself in a different era.

He has to become relevant again. Looking to repair his damaged relationship with his daughter Winnie, Gekko forms an alliance with her fiancé Jake Moore (Shia LaBeouf), a successful property trader. Jake’s bright future takes a dark turn when rumours of over-exposure to ‘toxic assets’ put an end to his first his company, Keller Zabel, and its founder, Lou (Frank Langella), who steps in front of a train when his request for an emergency bailout is denied. Devastated, Jake vows revenge on Bretton, who he believes to have spread the malicious rumours.

But can Jake and Winnie really trust the relentless, ex-financial titan.

Gekko’s got a grudge of his own against Bretton, his one-time protégé turned state

witness and promises to supply Jake with insider information in exchange for help reconciliating with Winnie.

Oliver Stone has aimed to create the definitive portrait of the culture of money and at some points, the film reaches the level of its 1987 predecessor, but there is too much family drama and too little storyline to make its mark in film history.